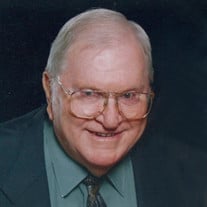 A Funeral Service for Kenneth Lee Carr has been scheduled for 10:00 AM, Thursday, March 18, 2021 at The Assembly in Broken Arrow. Burial will take place at 2:00 PM, Thursday, March 18, 2021 at the National Cemetery in Fort Gibson, Oklahoma. Viewing will take place from 10:00 AM until 8:00 PM on Wednesday, March 17, 2021 at Hayhurst Funeral Home, with the family greeting friends from 6:00 – 8:00 PM. Kenneth Lee Carr was born on Monday, April 7, 1930 in Bixby, Oklahoma, the son of Thurman and Jennie (Roat) Carr. He died on Wednesday, March 10, 2021 at St. Francis Hospital South in Tulsa, Oklahoma. He was 90 years, 11 months and 3 days of age. He was the oldest of nine children, eight boys and one girl. He was a 1947 graduate of East Central High School. Kenneth served in the Army during the Korean war. He attended the University of Tulsa, as well as Central Bible College, after honorable discharge from the Army. He held a variety of jobs over the years, including Finance Company Agent, Insurance Agent, Real Estate Broker, School Bus Driver, Maintenance for BAPS, owner of an automotive machine shop among others. Kenneth finished his career as a Delinquent Tax Collector for DeKalb County Tax Commission Office in Atlanta, Georgia. He was a private pilot and was co-owner of a Cessna plane. He took family and friends on several flying adventures. He enjoyed computers and stayed up to date with the latest technology. Kenneth married Norma Jane Wallain on June 21, 1957 at The Broken Arrow Assembly of God Church. They had four children and their family continues to grow. Norma preceded him in death on September 5, 2019. They were members of The Assembly at Broken Arrow. Kenneth was a man of few words but you could tell he loved the Lord by the way he lived. He read his Bible every morning and prayed for family and friends daily. His family was his life. He loved to go out to eat with them and fellowship. He was faithful to take everyone to church, starting as a young man - with his young siblings, his grandmother, his blind mother and then the grandchildren on to great-grandchildren Kenneth always made you feel safe. He touched many lives - Gone but never forgotten. He is survived by, Daughter, Karen McEntire of Broken Arrow, OK Son, Kenny Carr, and wife, Laurie of Davenport, FL Daughter, Kathy Linn, and husband Ronnie, of Broken Arrow, OK Son, Kelly Carr, and wife Angie, of Broken Arrow, OK Grandchildren, Allyson & Justen, Stevfen & Tonia, Daryl, Karla & Tito, Kendrae & Todd, Kraig, Katelynn & Matt, Taryn, Kevin, Kameryn, Nickolas, Justin and Abigail, Kayla, Kim and Eli, Kelly and Jesse. Great Grandchildren, Cheyenne, Austin, AJ, Ryker, Marcus, Lexi, Kanon, Ariana, Stratton, Everton, Tre, James, Isaiah, Eli, Titus, Kason (and Grayson to be born in March) Brothers, Thurman Carr, Jr., and wife, Carmen of Kaw City, OK David Carr, and wife, Virginia of New Orleans, LA Tommy Carr, and wife, Lana, Broken Arrow, OK Charles Carr, and wife, Debbie, Coweta, OK Brother-In-Law, Carl Stephens of Keifer, OK Sister-In-Laws, Bonnie Carr of Bixby, OK Pat Carr of Phoenix, AZ Numerous nieces and nephews and extended family. He was preceded in death by his parents, Thurman and Jennie, wife, Norma, brothers Floyd, Clifford, and Luey, sister, Florence, and grandson, Kurtis.

A recording of Kenneth's service can be seen at https://youtu.be/7j_TbhFLTXw

A Funeral Service for Kenneth Lee Carr has been scheduled for...

Send flowers to the Carr family.