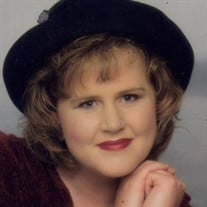 Kelly Diane (Blevins) Munson was born in Muskogee, Oklahoma on Tuesday, November 14, 1967, to Archie Lee and Helen Lavern (Gordon) Blevins. She passed from this life on Tuesday, March 22, 2022, in Tulsa, Oklahoma at the age of 54. Kelly was one of three children born to the Blevins. She grew up in Tulsa and then her family moved to the Haskell area where she graduated from Haskell High School in 1986. After that, she received her bachelor's degree from Northeastern State University in Tahlequah, Oklahoma. She married Stephen Weeks and became the mother of two daughters. A second marriage on October 19, 1998, to Richard Munson gave her a third child, her only son. Kelly worked several different jobs but the last one was with Southwestern Bell where she served as a Customer Support Agent. Kelly loved to sit at the table with her loved ones and put puzzles together all hours of the night. Her children have fond memories of her going to the bingo hall with her mom and coming home with winnings. She enjoyed fishing and was very passionate about watching football. She loved her Soaps, particularly General Hospital. Kelly was very resourceful, creative, crafty, and made magic happen for her children. She was always the funniest person in the room and had a sharp wit. She called her children, “Sugar Plum.” She loved her children and grand babies more than anything and was known as Grandma Kelly to each of them. She will be missed by all who knew and loved her. Left to cherish her memory are husband, Richard Munson of Broken Arrow Daughter, Brandy Adams (Robert) of Broken Arrow Daughter, Cassandra Womack (Cash) of Claremore Son, Sean Munson of Broken Arrow Sister Tamie Desrosiers (Jim) of Roseville, California 2 Grandchildren: Vivien Adams, and Arthur Adams Ex-Husband, Stephen Weeks of Haskell 3 Nephews: Tony Blevins, Josh Blevins, and Jason Metz 1 Niece: Kendall Maxwell And Mother-in-Law, Angela Munson of Coffee Springs, Alabama Those who preceded her in death were her parents, Archie and Helen Blevins, and her brother, Terry Blevins

Kelly Diane (Blevins) Munson was born in Muskogee, Oklahoma on Tuesday, November 14, 1967, to Archie Lee and Helen Lavern (Gordon) Blevins. She passed from this life on Tuesday, March 22, 2022, in Tulsa, Oklahoma at the age of 54. Kelly was... View Obituary & Service Information

The family of Kelly Munson created this Life Tributes page to make it easy to share your memories.

Kelly Diane (Blevins) Munson was born in Muskogee, Oklahoma on...

Send flowers to the Munson family.