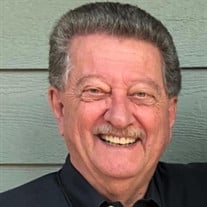 Services will be streamed live 11 am, Friday, April 10, 2020. A private family-only service will be held on Friday, April 10 at 11:00 AM in the Hayhurst Chapel, Broken Arrow, Oklahoma and will be live streamed on the Hayhurst Facebook Page at https://vimeo.com/406088378. Keith was born to Chauncey and Geraldine Yerkins Ward on Tuesday, January 8, 1946 in Butler County, Pennsylvania. Keith passed away on Tuesday, April 7, 2020 in Tulsa, Oklahoma at the age of 74. Keith was a true salesman at heart, being self-employed and representing several Oil and Gas companies in the US and Canada before retiring. He married Cheryl Leedy at Red Fork Baptist Church in west Tulsa on June 5, 1965. They were blessed with two daughters, Terri and Nicki. Keith was an exceptionally kind and loyal husband, father and grandfather. He nourished his family with love, attention and support. He was known to “embellish the truth” from time to time and never missed an opportunity to spin a good yarn for anyone who would listen. Papa never knew a stranger and loved to freestyle dance with his granddaughters and play golf with his grandson. But for all who knew Keith, they knew his true love for old muscle cars. He bought and restored several through the years and was an active member of the Tulsa T-Bird Club. Keith played a lot of golf with his brothers throughout the years. He always had a green thumb which was shown through all his hard work on his lawn and garden. Keith, along with Cheryl, and several other couples were the founding members of New Heart Fellowship Church in Broken Arrow where Keith served as an elder. Keith was a soft-spoken man who loved his’ Lord and his family deeply and will missed by all who knew him. Keith is survived by, Wife, Cheryl Ward, Broken Arrow, OK Daughters, Terri Dickerson and husband, Gary Dickerson, Broken Arrow, OK. Nicki Carrico and husband, Brian Carrico, Broken Arrow, OK Grandchildren, Shelby and Kylie Dickerson and Hunter Goodnight. Brothers, Don, Jed and Mike Ward Numerous cousins, nieces, nephews, and other loving family. Keith was preceded in death by his parents, one brother, CW Ward, and two sisters, Sandy Teubert and Charlene Fitzgerald.

Send flowers to the Ward family.