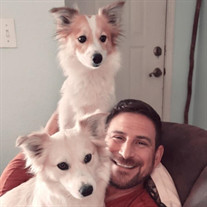 Kalin James Loyd of Broken Arrow, passed away Thursday, November 25, 2021 at the age of 40. Kalin was born Friday, November 20, 1981 in Thousand Oaks, California to Jim and Karen (Anshen) Loyd. Kalin graduated from Claremore High School in 2000. He was a railroad conductor with BNSF for over 15 years. He and his wife Amanda (Miller) Loyd met in Springfield, Mo at the end of 2015 and were married October 13, 2016. Kalin is proceeded in death by his Grandfather James E. Loyd of Broken Arrow, Grandfather Charles W. Anshen of California, Grandmother Estelle R. Budnick of Claremore and Uncle Andrew Anshen of Canada. In addition to his wife, Amanda (Miller) Loyd of Broken Arrow, he is survived by 4 children, Riley Loyd of Claremore, Emma Rayburn, Ellie Loyd and Wyatt Loyd all of Broken Arrow, his parents James Loyd and Karin Loyd of Claremore, his sister Kara Loyd of Claremore, niece and nephew Luna Loyd and Lincoln Fairchild both of Claremore, his Grandmother (GG) Alice Ann Loyd of Broken Arrow/Claremore and longtime friend Kyle Franks of Kansas. Kalin enjoyed training his 3 dogs Everest, Bailey and Bogan, showing off their tricks to anyone and everyone as he was so proud and good at it, taking his son Riley to the movies (a long time tradition), taking his smaller children and dogs on walks and to parks, watching educational documentaries, being in nature, falling asleep in his recliner cuddled up with his 3 dogs and 2 youngest children, laughing and cracking jokes, bragging about his children to anyone that would listen, hugs, smiling was his favorite, spending time drinking coffee and visiting on the porch with his father, listening to a variety of music, his favorite song was Island in the Sun by Weezer, reading and expanding his knowledge. He also enjoyed time spent and conversations with his long time friend Kyle Franks. His greatest joys in life however came from spending time with his family and most of all his children, Riley , Emma, Ellie and Wyatt. Kalin had a love for his family above all and a heart for his children. He will be missed deeply and loved forever and always. No services are scheduled at this time. The family asks for prayers for those he left behind.

The family of Kalin Loyd created this Life Tributes page to make it easy to share your memories.

Send flowers to the Loyd family.