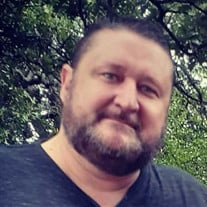 Justin Michael Nicholus Clark was born on December 19, 1975 in Tulsa, Oklahoma to parents Danny & Sharon (Taber) Clark and was the youngest of four boys. He passed from this life on Monday, June 21, 2021 in Coweta, Oklahoma at the age of 45. Justin was a 1994 high school graduate of Broken Arrow High School in Broken Arrow, Oklahoma. He and Ronale Duvall met and they married on August 20, 2003. They had three beautiful daughters and he would constantly display their artwork with great pride. He was a great husband and a wonderful father. He never skipped a beat to protect and defend those he loved. Justin will be remembered for his humor but especially for his smile. He would walk into a room and immediately brighten up everyone’s day just by his smile and if you refused, he would go to you and hug you and start kissing your cheek until you gave in. And once he had the audience’s attention, he would break out a joke or two. Justin was a painter by trade starting out on new homes and eventually making his way into the aviation field. He was always eager to talk about the different airplanes he would paint and would spout off random facts about each one. Growing up, he was an amazing baseball pitcher and enjoyed the sport his whole life. Justin had a deep appreciation for music, especially 70’s tunes. He always favored ballad songs and when a slow song would come on, he would lean back, close his eyes and start singing, and occasionally hugging the closest person to him. He was an avid fisherman and an exceptional marksman. He always appreciated nature and never missed an opportunity to sit back, close his eyes and absorb the sounds of nature and a warm summer breeze. He genuinely enjoyed cooking for his family and loved history and museums. Justin will be deeply missed by his family and friends. He is survived by, Wife, Ronale Clark of Coweta, Oklahoma Daughters, Morgan Clark (19) of Broken Arrow, Oklahoma Samantha Clark (18) of Coweta, Oklahoma Zoe Clark (14) of Coweta, Oklahoma. Parents, Danny & Sharon Clark of Broken Arrow, Oklahoma Brothers, Danny Clark II & Hope Clark of Pawnee, Oklahoma Chris and Kristie Clark of Kansas City, Missouri Brandan & Lori Clark of Chesapeake, Virginia. Justin was adored by his nephew, Devan and Becky Clark of Coweta, Oklahoma. Isaiah 6:8. Then I heard the voice of the Lord saying, “Whom shall I send? And who will go for us?” And I said, “Here am I. Send me!”

Justin Michael Nicholus Clark was born on December 19, 1975 in Tulsa, Oklahoma to parents Danny & Sharon (Taber) Clark and was the youngest of four boys. He passed from this life on Monday, June 21, 2021 in Coweta, Oklahoma at the age of 45. Justin... View Obituary & Service Information

The family of Justin Clark created this Life Tributes page to make it easy to share your memories.

Send flowers to the Clark family.