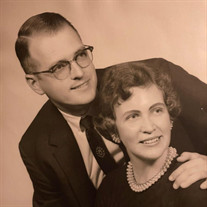 WISE, June Emmeline Louise Ruth, of Broken Arrow, died April 23 aged 88 following cancer surgery. June was born in St. Louis on May 26, 1932, to Anton H. and Edna Elisabeth (Hanisch) Ruth. She graduated from Roosevelt High School, Rubicam Business School, and attended evening classes at St. Louis University. She was employed by the Ralston Purina Company in St. Louis, where she worked her way up to Executive Secretary. She was a member of the St. Louis Tip Topper’s Club, a social organization for tall folks, and in 1960 was chosen as Queen of the Club and was sent to the annual convention in Atlanta as “Miss St. Louis Tip Topper.” On September 2, 1961, she married the love of her life, Donald. A. Wise. In 1963 they moved to the Washington D.C. area where Don worked for the U.S. government before retiring to Broken Arrow to be near family. June was preceded in death by her parents, sister Janet (Ruth) Johnson, and by Don, her beloved husband of 43 years. She is survived by a son, Kurt G. Wise, of Michigan. June was a true lover of animals and an ardent supporter of animal welfare organizations. She and her cat, Max, were devoted companions. She loved classical music and was fond of reading books. A memorial service will be planned for a later date at the First United Methodist Church in Broken Arrow. Friends are invited to donate to the First United Methodist Church Endowment Fund (112 E. College St., Broken Arrow, OK 74012) or to an animal care group of their choice. Burial will be at Fort Gibson National Cemetery, Fort Gibson, Oklahoma beside her husband.

The family of June Wise created this Life Tributes page to make it easy to share your memories.

Send flowers to the Wise family.