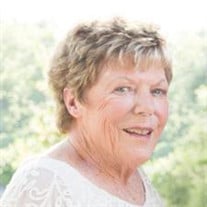 Julie Patricia Lackey was born on Saturday, January 28, 1939 in Tulsa, Oklahoma. She was the daughter of John and Lois (Ellis) Hull. She passed from this life on Thursday, June 25, 2020 in Broken Arrow, Oklahoma. She was 81 years old. She attended Tulsa schools and graduated from Tulsa Central High School, located in downtown Tulsa in 1957. Her grandparents, James Arthur and Lina Hull who were one-time owners of the now Tulsa Garden Center home in 1923. James Arthur was the person who founded the Tulsa Boys Home 1919 and in 1924 they created the conservatory and sunken gardens at the now Tulsa Garden Center. In December 1957, Julie and a friend were at Hubs’ Drive In one evening when Steve and his cousin Phillip noticed them. Phillip and Steve invited the two girls into their car which is how Julie and Steve first met. They were inseparable, going on many dates to Pennington’s Drive-In on Peoria as well as the Admiral Twin Drive-In Theatre. They married on May 29, 1959 at First Presbyterian Church in downtown Tulsa and enjoyed over 61 years together. During their early years of marriage, they lived in East Tulsa in the Magic Circle addition. They later built a home in Broken Arrow in 1972. During the 90’s Julie and Steve moved to Southern California for 8 years and then returned to live in their current home in Broken Arrow. LoRheda Lackey (Steve’s mother) was like a second mother to Julie. The two ladies went into a retail business together for many years called Miss Julie’s. Always exhibiting an entrepreneurial spirit, Julie and Steve owned a Daylight Donut Shop on South Memorial for 15 years. She was the most selfless person ever, always looking to please everyone around her. She was very fun to be around and always up for any adventure. She loved helping her son, Steve Lackey Jr, run casino bus trips to Tunica, Mississippi which she did up until 2018. She went out of her way to make sure her casino bus trip customers had a great time. Julie loved to travel ANYWHERE and did so up until late 2019. She especially loved cruises, which the family went on several over the years. She loved spending time with family at their cabin at Grand Lake. One of her favorite things was to sit outside drinking coffee early in the morning with family at the lake or wherever they were vacationing. When traveling, Julie and her daughter Kim loved watching sunsets together over a glass of wine. Her favorite TV shows were NCIS, The Young and the Restless, Price is Right, and Blue Bloods. Her favorite flowers were roses. Julie’s favorite foods were filet mignon, shrimp scampi and coconut shrimp. She also loved hamburgers on the grill, especially when the family were together at the lake. She and Steve owned a yellow Labrador Retriever named Jake whom she dearly loved. Julie leaves a legacy of family and friends behind who will miss her dearly. Julie is survived by her husband, Steve, of their home in Broken Arrow. Daughter, Kimberly Wolfe and husband, Tim of Broken Arrow. Daughter-in-Law, Suzanne Lackey of Coweta Grandchildren Patricia Byrd and husband, Matthew of Broken Arrow Ashley Whitfield and husband, William of Broken Arrow Tyler Forbes of Skiatook Great Grandchild: Blayze Byrd She was proceeded in death by her parents, brothers, John and Jim Hull, and son, Steven, Jr. Lackey In lieu of flowers, please consider making a donation to Oklahoma Cancer Specialist and Research Institute at 12697 East 51st Street South Tulsa, OK 74146 (www.ocsri.org)

Julie Patricia Lackey was born on Saturday, January 28, 1939 in Tulsa, Oklahoma. She was the daughter of John and Lois (Ellis) Hull. She passed from this life on Thursday, June 25, 2020 in Broken Arrow, Oklahoma. She was 81 years old. She... View Obituary & Service Information

Send flowers to the Lackey family.