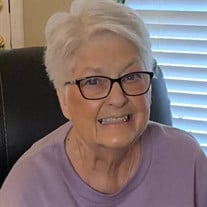 Julie Kay (Scott) King was born in Fort Dodge, Iowa on Sunday, August 8, 1948, to John Palmer and Lila Lydia (Dencklau) Scott. She passed from this life to her eternal home in heaven on Sunday, February 20, 2022, in Tulsa, Oklahoma at the age of 73. Julie was one of six children. Growing up, her parents owned a roller-skating rink in Omaha, so she and her siblings grew up on wheels. In fact, her future husband, Don, called her “an angel on skates”. She attended school in Omaha and graduated from South High School in Omaha in 1966. At the age of 19, she went to work at Woolworths Department Store. Her boss, “Mr. King”, gave her a ride home from a Christmas Party and they had “car trouble”. It was a whirlwind romance and they married on April 27, 1968, in Omaha. She became the mother of three children, whom she adored. Julie was a full-time homemaker, caring for her husband, Don, and their three children but she always loved children and spent a few years as a preschool teacher. Her children said, “she was like the female version of Santa Claus” and kids were always attracted to her warmth and kindness. Her hobbies included crafting, art, woodworking and being an exceptional seamstress. Words her children used to describe her include strong, beautiful, selfless, loving, humorous, faithful, devoted to her family, and protective. Mom always had our backs. She loved fixing her daughters long hair, and always encouraged them to keep it long, even though she wore her hair short. There was always an unspoken rule of no short hair until her hair got very long during the COVID pandemic and then the rule was busted. She had lots of nicknames given to her by her children and grandchildren including “Juju”, “Lammy Mom”, “Bunny”, “Chester”, “Muffy”, and “V”. She and Don were committed Christians their entire married life. She had a way of making the people she loved feel so special and important, she will certainly be missed by all who knew and loved her. Left to cherish her memory are her mother, Lila Schafer (Donald) of LaVista, Nebraska Daughter, Julie Kae King of Broken Arrow Son, Jason Anthony King (Betty) of Valley Center, California Daughter, Amanda Anne King of Broken Arrow Sister, Connie DeVivo of Broken Arrow Sister, Wendi Sherrill of Papillion, Nebraska Brother, David Scott (Denise) of Papillion, Nebraska Brother, Daniel Scott (Jean) of Papillion, Nebraska 5 Grandchildren: Kaitlin, Johnathan, Jovi, Kirk (Alicia), and Tyler (Megan) And 2 Great Grandchildren: Zoey, and Carmine And a special cousin, Christine Wood of Des Moines, Iowa Those who preceded her in death were her father, John Scott; her husband, Donald King; and one brother, Kevin Lee Schafer.

Julie Kay (Scott) King was born in Fort Dodge, Iowa on Sunday, August 8, 1948, to John Palmer and Lila Lydia (Dencklau) Scott. She passed from this life to her eternal home in heaven on Sunday, February 20, 2022, in Tulsa, Oklahoma at the age... View Obituary & Service Information

The family of Julie Kay King created this Life Tributes page to make it easy to share your memories.

Send flowers to the King family.