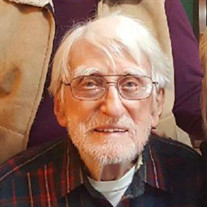 A mass of Christian burial for Joseph Paul “Joe” Marusa will be 10:00 a.m., Friday, March 6, 2020 at St. Benedict Catholic Church, Broken Arrow, Oklahoma. Viewing will be at the funeral home on Thursday from 1:00 p.m. to 7:00 p.m. with a rosary beginning at 7:00 p.m. Joe will be laid to rest at Park Grove Cemetery. Joe was born in Madera, Pennsylvania on January 8, 1921 to Martin and Anna (Kasprik) Marusa. Joe passed away in Broken Arrow, Oklahoma on Saturday, February 29, 2020 at the age of 99. Joe’s family migrated from Czechoslovakia/Slovakia to the United States where Joe grew up and graduated from high school. He attended technical school before he enlisted in the United States Navy where he served on sub chaser in World War II and was at the helm of the ship through the Panama Canal. Joe faithfully served our country until his honorable discharge. On February 3, 1942 Joe married Margaret Murray in Cleveland, Ohio. They were blessed with five children. Joe was a wonderful husband, father, grandfather and adored his family and loved spending time with them. Together with his family they enjoyed many camping and lake trips. Joe also ensured all five of his children were college educated. Joe was very savvy with technology and enjoyed working on his iPad and computers. He also liked woodworking, making wood carvings, doll houses and furniture for his family and friends. Joe was a member of St. Benedict Catholic Church since 1993. Donations may be made to Catholic Charities in his name. Joe is survived by, Children, Janet and Jim Sharum, Broken Arrow, OK Dan and Marilyn Marusa, Houston, TX Bob and Diane Marusa, Tarpon Springs, FL Jim and Marilyn Marusa, Edmond, OK Tom and Marie Marusa, Lewisville, TX 11 grandchildren, Brian, David, Stephen, John, Scott, Kimberly, Kristen, Eric, Austin, Aaron and Allison 10 Great grandchildren, and 3 great great grandchildren Joe was preceded in death by his parents, four brothers, John, Edward, Martin, and Vince and four sisters, Mary, Eleanor, Nancy and Irene.

The family of Joseph Marusa created this Life Tributes page to make it easy to share your memories.

A mass of Christian burial for Joseph Paul “Joe” Marusa will...

Send flowers to the Marusa family.