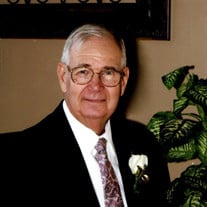 Johnny Franklin Collier of Broken Arrow, Oklahoma passed away peacefully at home after a long battle with Alzheimer’s disease, surrounded by his loving family on August 11, 2021 at the age of 81. Johnny was born Sunday, September 24, 1939 in Fillmore, Oklahoma to John T. and Beatrice (Triplett) Collier. The family moved to Broken Arrow, in January of 1955. At 16 years of age he quit school and joined the U.S. Army and after basic training, was deployed to Korea where he spent approximately two years. Upon returning to the U.S. and Broken Arrow in 1958, he and Janet McDougal began to date, having their first date on Janet’s 17th birthday. In December of that year they were engaged. Janet and Johnny were married on November 20, 1959 at the Assembly of God Church with Brother James C. Dodd officiating. Their marriage was blessed with the addition of two sons Brad and Todd, and one daughter Joannie. On November 20th, 1966 Johnny joined the BAPD, his was Badge #5. He started out as a patrol officer, then Sergeant, Lieutenant and finally as Assistant Chief. After his promotion to Assistant Chief, he was selected to attend the FBI Academy at Quantico, Virginia as a member of the 145th Session in 1986. After serving thirty years on the BAPD Johnny retired in 1996. Johnny was a hardworking man with hardworking hands. In the early years of marriage, he often worked two jobs to support his young family. By day, he poured concrete, at night he was a policeman. He loved hunting and fishing, riding his horses, he was skilled at archery, and was an excellent marksman with firearms. He enjoyed building and flying line control and RC airplanes with his sons and son-in-law. Johnny took pride in his home, his lawn, creating beautiful landscaping and flowerbeds. His home inside and out was truly his castle. In their younger years Johnny and Janet loved taking motorcycle trips with fellow police officers and their wives. In later years, they enjoyed trips to Branson with a group of old and dear friends. Johnny and Janet are members of New Bethel Assembly of God Church where Johnny served as a Deacon. Johnny was always willing to share his wealth of knowledge with anyone who could benefit from it, whether it was hunting, fishing or flying model airplanes, even sharing life lessons. His greatest joy was his family and he always made sure that everyone else was taken care of before himself. His grandchildren fondly called him “Bird”, named by Whitney, his first grandchild. Thirty-two years later, he was renamed “O’Dad” by the first great grandchild, Peyton, who is Whitney’s daughter. All the grandchildren and the two great grandchildren call Janet “Honey” because that was Johnny’s term of endearment for her. Survivors include: Wife Janet Collier of the home Sons Brad Collier and wife, Debi of Broken Arrow Todd Collier and wife, Andrea of Broken Arrow Daughter Joannie Carson and husband, Lonnie of Broken Arrow Grandchildren Collier Whitney Anderson and husband, Mika of Broken Arrow Chase Collier and wife, Janelle of Broken Arrow Marin Collier of Broken Arrow Cameron Carson of Broken Arrow Natalie Grace Collier of Broken Arrow Kristen Passmore and husband, Curtis of Broken Arrow Alex Dzeda of Mobile, Alabama Kassie Dzeda of Phoeniz, Arizona Jake Dzeda of Broken Arrow Great Grandchildren Peyton Anderson & Saylor Anderson of Broken Arrow Wyatt Allen & Dalton Allen of Broken Arrow Emerson Passmore of Broken Arrow Damon Anderson, Tyler Anderson & Geneva Anderson of Broken Arrow Brother Tommy Collier of Olathe, Kansas Johnny is preceded in death by parents, John and Beatrice Collier Doetzel.

Johnny Franklin Collier of Broken Arrow, Oklahoma passed away peacefully at home after a long battle with Alzheimer&#8217;s disease, surrounded by his loving family on August 11, 2021 at the age of 81. Johnny was born Sunday, September 24,... View Obituary & Service Information

Send flowers to the Collier family.