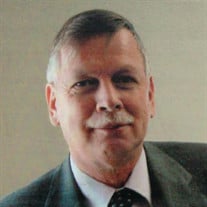 John Thomas Olendorff was born on Thursday, October 30, 1947 in Tulsa, Oklahoma to Irvin Frank and Mary Viola (Hellinger) Olendorff. He passed from this life to his eternal home in heaven on Thursday, February 11, 2021 in Tulsa, Oklahoma at the age of 73. John was the only son of the family with ten sisters, five of them older and five of them younger. His father worked as a warehouseman for OTASCO, and his mother was a full-time homemaker. As a young boy, he attended Immaculate Conception grade school, then he transferred to an all-boys catholic high school in Subiaco, Arkansas. It was during this time at Subiaco that he asked the Lord to be his savior, and this is where he began his walk with Christ. After high school graduation, John enlisted in the U.S. Navy. He served in Vietnam for four years as a corpsman. During his service he made lifelong friendships that he truly cherished. He also found his passion for photography, while in Vietnam with the purchase of his first camera. This passion would continue throughout John’s life. He always appreciated God’s creations in nature, some favorites were flowers, insects, and wildlife. This was evident in the beautiful photographs he took of them. Never letting the opportunity pass by to document God’s artwork. He met his wife Diana of 48 years on a blind date. They knew immediately that they were in love. A few months later he proposed at the Pagoda Restaurant. This started the beginning of their love story. They married on June 17, 1972. John was a devoted husband and was overjoyed, when he became a father to Jason and Jeffrey. He always knew the importance of keeping Christ in the center of these relationships. John spent 28 years as a Systems Analyst for PSO and rarely missed a day of work. This strong work ethic even followed him into retirement. Helping others has always been a big part of who John was, which led him to working at the VA Call Center. Being there for other veterans brought him comfort. Besides his photography, he also enjoyed coin collecting. Both of these joys he shared with his sons. Diana and him had also found a hobby to enjoy together, crafting. They started a business together making bird feeders and wind chimes. Working together, sharing their talents to make beautiful pieces of art. This led to many adventures traveling across the Midwest to craft shows and fairs. John and Diana cherished this time together immensely. Their hearts also cherished their brothers and sisters in Christ. They were longtime members of Grace Missionary Baptist Church in Wagoner, where John served the Lord as a Deacon and the church’s treasurer. His church family including even the littlest ones will miss him deeply. John was so proud to become a “PaPa”. He had such a special connection with all three of his grandchildren. He never missed an opportunity to celebrate them. This normally meant that he had his camera ready to celebrate and document, whether it was birthdays, dance recitals, or baseball games. His most recent occasion was the baptisms of his granddaughters. Such a proud moment for a proud Papa. He will surely be missed by so many, but there is the hope and peace of seeing him again. John truly has the best lens now from heaven.

Send flowers to the Olendorff family.