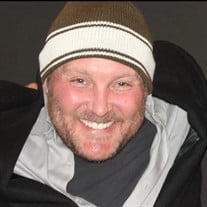 John (Johnny) was born November 1st, 1972 to John David Jennings and Mary Sue (Via) Jennings in Hyannis, Massachusetts. He passed from this life to the next on Sunday, September 5th at his home in Chicago, Illinois at the age of 48. After spending his early years in Virginia and Louisiana, he moved to Broken Arrow in 1988. He graduated from Broken Arrow High School and went on to receive his degrees in finance, economics, & legal studies from the University of Oklahoma. There he met and married Anna Tibbitts, and they enjoyed many great years together. He was a loyal Sooner, regardless of which state he went on to find successes. He worked incredibly hard and was a key player in the finance and insurance industries in San Diego, Los Angeles, Madison, & Chicago. Wherever he went, he always had his family in Broken Arrow, especially Martha, who, since his teenage years, he called mom and continued to ever since. His father, John, could not have been more proud of the man Johnny became. They truly became more than father and son, but were best friends as well. He was an inspirational big brother to Brian (Xander) who will always strive to be a fraction as cool as him. During his most recent times back home in Broken Arrow, he got to be awesome uncle Johnny to his sister Teera and brother-in-law Fabio’s children: Fabio Paul, Brielle, & Reina, who he adored. And of course, we could never forget his fur baby, always by his side, Danger. He could walk into any room and befriend new people that soon filled the air with shared laughter, often over his amazing stories or ridiculous sense of humor. He made so many friends, especially here in Broken Arrow, that loved his incredible wit, unique quips and ability to create great conversations out of thin air. He was a pillar of support whenever and wherever anyone needed it. Regardless of the sacrifices he selflessly made, he was always there for his family, especially when we all came together around his dad’s illness and passing. He was the ultimate support, there to sit with us in the dark clouds and rain, or provide rainbows of laughter to bring back the sun. He’ll be missed by so many whose lives he touched. He leaves behind friends and family that will never forget him. He loved his parents, his brother, sister, nieces, nephew, cousins, aunts, uncles and his extended family. We find comfort in knowing he is up above, with his dad, laughing like old times, and we will see him again. He is survived by, Second Mom, Martha Jennings-Troy and husband Don Troy, Broken Arrow, OK Mother, Mary Sue Jennings, Waynesboro, VA Brother, Brian Jennings, Tulsa, OK Sister, Teera Leigh Spino and Husband Fabio Spino, Broken Arrow, OK Nephew, Fabio Paul Spino and Nieces, Reina Spino, Brielle Spino, Broken Arrow, OK; Aunts, Uncles, Cousins, extended family and his beloved cat Danger. John was preceded in death by his father, Dr. John David “Doc” Jennings The family requests memorials to: American Heart Association www.Heart.org or Tulsa SPCA www.aspca

John (Johnny) was born November 1st, 1972 to John David Jennings and Mary Sue (Via) Jennings in Hyannis, Massachusetts. He passed from this life to the next on Sunday, September 5th at his home in Chicago, Illinois at the age of 48. After... View Obituary & Service Information

Send flowers to the Jennings family.