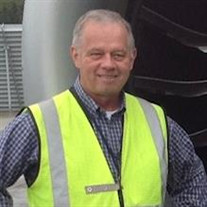 John William Fossard was born in Springfield, MO on Monday, June 18, 1956, to Thomas Etchison and Eupha Columbia (Warren) Fossard. He passed from this life on Friday, August 27, 2021, at his home in Broken Arrow, OK at the age of 65 after battling glioblastoma multiforme. John was the youngest of three boys born to Tom and Eupha. Most of John’s early years were in Springfield, MO, with a two-year period in Paris, KY during elementary school. The family returned to Springfield, MO and he graduated from Glendale High School in 1974. After high school, John enrolled at Southwest Missouri State University where he played on the college tennis team. He graduated from SMSU with a bachelor’s degree in Geology in December 1978. He moved to Tulsa to work as a geologist at Godsey-Earlougher Division of Williams Brothers Engineering Co. This is where he met Cyndy and where he cultivated his interest in the jets flying overhead. He married Cyndy (Newlin) Fossard on December 8, 1984 and they eventually became parents of two daughters. In 1980, John became a pilot with the 125th TFS in the Oklahoma Air National Guard. Major John “Fozzy” Fossard flew the A-7 D/F and the F-16 C/D during his tenure. He began his career with American Airlines in June 1986 and retired after 35 years in June 2021. After two years of flying passengers, John moved to maintenance flying for American. He was part of a small crew that provided specialized flying when planes were disabled within the system, after they were maintenanced and needed approval to return to passenger flights, and accepting new aircraft the company purchased. Over his career at American, he flew the DC 9, DC 10, MD 90, 727, 737, A300 and A320. Beginning as a Flight Engineer, he moved to First Officer at Flight Test TULE and retired as Captain John Fossard. John was passionate about his family, his career as a pilot, and bicycling. He often enjoyed spending time at his lake house on Grand Lake. He loved problem solving his way through home projects. When not at the lake house, you’d find John on the bike trails heading out to Riverside. John enjoyed the beauty and simplicity that nature offered. He was a family man, dedicated to his wife of 37 years, and expressed daily love and pride in his two daughters. He loved bird watching and feeding wild turkeys with his brother, Jim, in Missouri. Throughout his flying career, he had the opportunity to fly great planes with great men – many who considered John their brother. He never hesitated to provide counsel and words of advice to those he loved. Friends and family will miss his dynamic presence. Preceded in death were his parents and one brother, Thomas “Warren” Fossard. Left to cherish his memory are his wife, Cyndy, of the home in Broken Arrow; daughter Jessica Brundage (Matt) of Broken Arrow; daughter Kelly Fossard (Sarah) of Broken Arrow; brother Jim Fossard of Springfield, MO; and granddaughter Madison Brundage. In lieu of flowers the family is requesting donations in John’s name to either the Coffee Bunker at www.coffeebunker.org or Stephenson Cancer Center, a part of OU Medical Center in Oklahoma City at www.ouhealth.com

John William Fossard was born in Springfield, MO on Monday, June 18, 1956, to Thomas Etchison and Eupha Columbia (Warren) Fossard. He passed from this life on Friday, August 27, 2021, at his home in Broken Arrow, OK at the age of 65 after battling... View Obituary & Service Information

Send flowers to the Fossard family.