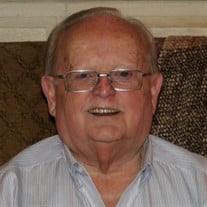 John W. Derr, Jr., age 86, of Muskogee, Oklahoma, went home to be with the Lord on Sunday, February 7, 2021. He was born to Letha and John W. Derr, Sr. on January 4, 1935 in Quitman, Texas. John was one of seven children, the only boy, and the apple of his sisters’ eyes. He grew up and graduated high school in Quitman, Texas. After high school, he worked in the services industry and was a part of the Army National Guard before choosing to answer the call to ministry. He attended Lon Morris College and Stephen F. Austin State University, graduating with a degree in Sociology in 1961. While attending college, John ministered in the United Methodist Church where he met his first wife, the mother of his children. He completed his ministerial studies at Perkins School of Theology, SMU. He married his wife Janet, November 24, 2006 while serving as Pastor of Believer’s Christian Fellowship in Muskogee, OK. His ministry spanned some 65 years. John was a man of God who truly lived for helping others no matter the impact on him. He was a prayer warrior, faithful servant, selfless, generous, ornery and compassionate man. If anyone embodied love and grace, it was John. A bit boastful as well, “they get their good looks from me because they come from ‘good stock,’” is what he would always remind his children and grandchildren. John is survived by his wife, Janet Derr; children, Tresa and Andy Patti, Terry and Tracy Derr, Cynthia and Todd Turner; grandchildren, Megan and Sam Masiel, Lindsey and Dustin Zulkowski, Joshua and Amanda Patti, Trevor and Leah Derr, Taylor and Spencer Foger, Katie Turner and Chase Turner; great-grandchildren, Peyton Masiel, Dylin Masiel, Addyson Zulkowski, Hunter Zulkowski, Logan Patti, Gabriel Patti and Koa Derr; siblings Tommie Avera, Karen and David Cobble; stepchildren, Joshua Morris, Dessra and Justin Potter; nieces, nephews and many friends. He was preceded in death by his parents, siblings, Letha Fay Derr, Wilda Derr, Beulah Lenox and Johnnie Sada; brothers-in-law Asbury Lenox and Lawrence Avera. In lieu of flowers, please consider donating to: Kairos Global Missions https://kairosglobal.co/give click ‘give to missionary’ button The code for his grandson Trevor Derr’s Family is T44266D.

The family of John Derr, Jr. created this Life Tributes page to make it easy to share your memories.

Send flowers to the Derr, family.