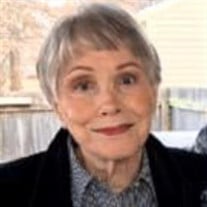 Amy who became know as Joan to her family and friends was born in Dallas, Texas on Saturday, March 17, 1928 (St. Patrick’s Day) to Alton and Jean (Koch) Farrar. She passed from this life on Thursday, April 1, 2021 at the age of 93 in Tulsa, Oklahoma. Joan spent the first few years of her life in Dallas before she and her parents moved to Oklahoma City where her father owned a printing company and her mother a fashion center. She attended school in Oklahoma City and graduated in 1946. She attended several classes at Oklahoma City University before her first marriage, but her true calling was to be a full-time mother. She and her first husband, Leon, had four children: two boys and two girls. She raised the kids and Leon was a CPA in Drumright, Oklahoma where they made their home. After Leon’s death, Joan remarried in 1987 to Richard Jessup. They were married 30 years until his passing in 2017. Joan’s children and grandchildren described her as loving, nurturing, a great storyteller, and a great listener but quite a spitfire. They raved about her cooking, especially her fried chicken and roast. She also made homemade cabbage rolls for the famous Freddy’s restaurant in Drumright for many years. One of the many lessons they learned from her was to respect other people and the things they worked hard for. Joan is survived by: Son Leon Goff of Tulsa Daughter Judy Rodgers (Jeff) of Farmers Branch, Texas Daughter Jana Hair of Stillwater 8 Grandchildren: James Goff, John Goff, Jr., Kenny Quantie, Steven Quantie, Brandy Breedlove, Leon Russell Goff, Eric Collins and Amy Key And numerous Great Grandchildren She was preceded in death by: Her parents Alton and Jean Farrar, a sister at birth, son John Goff; grandson Jeff Rodgers, Jr., husband, Leon Goff and husband, Richard Jessup

The family of Joan Jessup created this Life Tributes page to make it easy to share your memories.

Amy who became know as Joan to her family and friends was born...

Send flowers to the Jessup family.