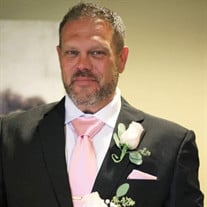 James Peter Hock was born in Manhasset, Long Island on Thursday, July 16, 1970 to Peter Leo and Marie (Rao) Hock. He passed from this life to his eternal resting place on Saturday, April 24, 2021 in Tulsa, Oklahoma at the age of 50. Jimmy was the oldest of three children, having two younger sisters. His family moved from Long Island to Bixby, Oklahoma when he was a young boy. He was an outgoing, fun, athletic boy who loved listening to music. He liked baseball but loved football, playing on the championship Bixby High School Football teams in the late 1980’s. He was also very artistic with a hidden talent for sketching. He could draw football players in action like no one else. Besides Bixby Football, Jimmy was a fan of OU Football and the NY Giants. He graduated from Bixby High School in 1988. He attended St. Gregory’s University in Shawnee, Oklahoma where he met Nicole. After dating for several years, they married on May 31, 1997. Their union resulted in two children: daughter, Amanda and son, Trevor. Jimmy was a very involved and supportive dad, coaching Trevor’s Football and Baseball teams, and passed along his love of music to Amanda. His favorite band was KISS. His family described Jimmy as loving, gentle, kindhearted, funny, quick witted, a wise guy who could always make his baby sister laugh. He was always happy to see others’ accomplishments and was enormously proud of his children and his nieces and nephews. He loved animals, especially dogs. Jimmy enjoyed speaking to people and that lead to a lifetime of sales jobs. He was a member of the Knights of Columbus and St. Benedicts Catholic Church in Broken Arrow. He will be missed by all who knew and loved him. Jimmy is survived by: Parents, Pete and Marie Hock of Tulsa Sister, Jana Turner and her husband Chris of Claremore Sister Andrea Hock of Broken Arrow Daughter, Amanda Griffin and her husband Nick of Bixby Son, Trevor Hock of Bixby Mother of Jimmy’s Children, Nicole Sims of Deer Creek Niece, Allison Turner and her fiancée Blake Stone of Claremore Nephew, Dalton Turner of Claremore Niece, Megan Turner of Claremore Aunt, Madeline Rao of Pembrooke Pines, Florida Uncle, Frank Hock and his wife Cathy of Roseville, California He was preceded in death by both his paternal and maternal grandparents.

James Peter Hock was born in Manhasset, Long Island on Thursday, July 16, 1970 to Peter Leo and Marie (Rao) Hock. He passed from this life to his eternal resting place on Saturday, April 24, 2021 in Tulsa, Oklahoma at the age of 50. Jimmy was... View Obituary & Service Information

The family of Jimmy Hock created this Life Tributes page to make it easy to share your memories.

Send flowers to the Hock family.