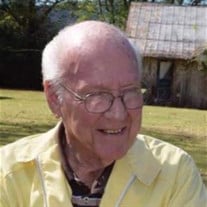 Jimmie Frank Allison (August 1931-September 2020) was born to Fern and Blanche Allison in Hitchita, OK, and graduated high school there. He married Doris Jones from Checotah in 1951. They raised four children: Jan, Kathy, Dianna, and Jimmie, Jr. Jim worked for PPG in Henryetta until 1972, but then transferred to the Wichita Falls, TX, PPG plant. Doris and he lived in Burkburnett, TX until 2009 when they decided to move back to Oklahoma where they took up residence in Broken Arrow. Living in Oklahoma renewed an interest in some family land with 14 acres of lake front on Lake Eufaula. In 2019 Jim committed to building a cabin on the property. It wasn’t a rush job, but the cabin was finished in the spring of 2020. Although he never got around to spending the night there, for a long time after the cabin was finished he drove there once or twice a week, maybe to mow with the brush hog or maybe just to sit on the surround porch and watch the lake. However, mowing with the tractor was his favorite thing. He was even a member of a tractor club and owned several classic tractors. The lake cabin was a huge accomplishment. His dad, his brother, and he had done a lot of clearing 50 years ago in preparation for building. Sadly, his brother was killed in a car accident and the remaining dad and son just lost heart. It got to be a regret that he never did anything with the land so he set about gathering supporters. No one will say everything went smoothly the entire time of construction, but they stuck with it this time, and now it’s a cabin many in the family have already enjoyed. We have photos of multiple baskets of fish, friends and family gathered around the table and kitchen island for meals, deer stands ready for October 1st, and so much farm equipment there’s no room in the garage for anything else. Dad was diagnosed with esophageal cancer in March 2020. For five weeks, five days per week, he reported to CTCA for radiation on four of the days and chemo on one day. Last Tuesday, September 22nd, he spent the entire day visiting with doctors at CTCA discussing his lack of appetite, weakness, inability to sleep, and acid reflux. He didn’t get home until 8 PM and had to be back bright and early the next morning for an EGD. The EGD revealed an ulcer on his esophagus and an entirely closed duodenum. After several pints of blood and IV fluids he was able to walk from his bed to the bathroom if someone guided his pole of meds. He was released from CTCA Saturday afternoon, and joyously showered with Doris’ help in his own shower. Sunday morning he requested a small bag-lined waste paper basket to spit in. After about 30 minutes, the spit looked like brown blood. An ambulance was called. The EMT’s tried to intubate in the ambulance but he was taken to Hillcrest South. The family received a dreaded call an hour later. Jim is pain free now and at peace. He was a member of First Baptist Church in Bixby and was there mostly every Sunday until COVID19 came along. He missed his church family and wanted to return, but he knew he couldn’t jeopardize his or his wife’s health. He was very much a by-the-rules kind of man and a bit of a perfectionist, no matter how much time it took to get it perfect. His family is proud of his strength, his persistence, and his constant willingness to help. He really was a jack of all trades, except technology. We were always glad to help him with that just to repay him for odd jobs he did for us (most recently for me…fixing my drippy kitchen faucet)! Jim is survived by: His wife, Doris Allison of the home Daughter, Jan and Al Gatti Their children: Jeremy Jameson and Ricardo Bandera Geoff Jameson Daughter, Kathy and John Engroff Their children: Chaston and Lucy Engroff Allison Engroff Daughter, Diana and Melvin Sheik Their children: Tiffany Tigrett Jereme and Heather Sheik Josh and Sarah Sheik Son, Jimmie, Jr. and Freddie Allison Their children: Casey and Keaton Hougen Cody and Megan Allison Zoey Allison Great-grandchildren: Hailey, Owen, Lyla and Aubrey Jameson Tessa Tigrett, Ethan, Tristin and Abigail Sheik Van and Graham Hougen Former Sons-in-law: Mike Jameson and Jeff Tigrett Doris’ Brothers and Sisters: Kay and Virgil Foster Barb and Jim Rhodes Ralph and Susan Jones Darrell Jones Wanda Bullock Lewis Jones Madeyn and Tommy Sparks Jim was preceded in death by: his parents, James Fern Allison and Blanche Williams Allison and a brother, Marion "Sonny" Allison

Send flowers to the Allison family.