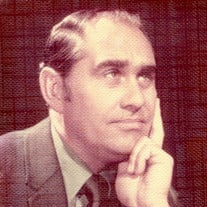 James Martin Lockmiller was born in Wagoner, Oklahoma on Friday, December 8, 1933, the only child of Jack and Edith (Brown) Lockmiller. He passed from this life to his eternal home in heaven on Monday, August 2, 2021 at the age of 87. Jim as he came to be known grew up on a family farm but by the time he was a teenager his father opened a car lot and Jim began his career selling cars at a very young age. After graduating from Will Rogers High School in Tulsa in 1951 he went to work at several different dealerships in the Tulsa area selling cars. After a few years working for others, Jim started his own business, Lockmiller Motor Company, and ran it for 50 years over on 11th Street. He met and fell in love with Joy Lindley Meyer and the two were married on December 28, 1967, in Las Vegas, Nevada. They became parents to four sons. Jim had many hobbies that included golf, basketball at the YMCA, playing drums and bass guitar. He loved going on golf buddy trips with friends but played regularly at Indian Springs Country Club for many years. The family has many good memories of motor home adventures they shared. Jim and Joy surrendered to the pastoral ministry and pastored several churches in the area, most recently Redemption Life Center in Catoosa, Oklahoma. Their ministry lasted almost as long as the 53 years they have been married. Jim counselled many people in those years of ministry. Words Jim’s family used to describe him are trustworthy, honorable, loving, one who cared deeply for his family and went out of his way to help other people. He will be deeply missed by all who knew and loved him. Those left to cherish Jim’s memory are his wife, Joy, of the home in Broken Arrow Son, Jeffrey Lockmiller of Cleveland, Oklahoma Son, Jonathan Lockmiller (Ana) of Tulsa Son, Joel Lockmiller of Broken Arrow 8 Grandchildren: James, Suzanne, Jason (Danielle), Jacob, Haley, Steven, Ivan (Abby) and Vicki (Anthony) 6 Great Grandchildren: Nicholas, Lucy, Maggie, Adriyel, Asiel and Aria Those who preceded Jim in death are his parents and a son, Jack Earl Lockmiller.

James Martin Lockmiller was born in Wagoner, Oklahoma on Friday, December 8, 1933, the only child of Jack and Edith (Brown) Lockmiller. He passed from this life to his eternal home in heaven on Monday, August 2, 2021 at the age of 87. Jim as... View Obituary & Service Information

The family of Jim Lockmiller created this Life Tributes page to make it easy to share your memories.

James Martin Lockmiller was born in Wagoner, Oklahoma on Friday,...

Send flowers to the Lockmiller family.