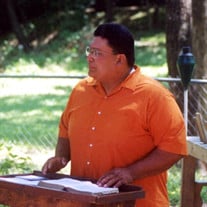 Jim Whitman Littlehead-a father, a child of God, and a friend to all-was called home on July 12th, 2021. He was 53 years old. Born May 21st, 1968 in Claremore, Oklahoma to Jimmy and Shirley (McIntosh) Littlehead, Jim, although much reserved, maintained a big presence in life and in the lives of others from the beginning to end. He enjoyed sports, loved playing and competing in football where he became a standout with the Coweta Tigers before graduating in 1986 from Coweta High School. No one who met Jim forgot his infectious love for his children. He enjoyed watching and conversing about his children’s extra-curricular activities, from sports to singing. Jim delighted in this aspect of his children’s life so much, many of times he took on the role of “Coach” as well, leading his children at home and also on the sidelines. Jim carried over that same love to his grandchildren, his face lit up in their presence and he would be quick to scoop them off their feet and lift them close to him for a herculean squeeze of a hug. Jim was a hard-worker and provider for his family. He was a skilled carpenter who maintained a full-time career while operating a side business, all while being the personal handyman to all who carried his phone number. With his small business he provided many loved ones with more than just job opportunity. He taught them a skill. Jim was known to be customer friendly and provided many deals, running such specials as the “PAY ME NOW AND I”LL DO THE WORK LATER”, the “OH, I THOUGHT YOU WANTED IT DONE LIKE THIS”, and finally, the “I’LL BE RIGHT BACK, I FORGOT MY TOOLS.” Jim was a spiritual man and was involved in many church activities. In the late 1990’s he became an ordained minister. He enjoyed reading the word of God and telling others about the word of God. He would pray with you and moments later share a laugh with you. He will be deeply missed by his family, friends, and all that knew him. Jim is survived by his Daughter, Brenna Littlehead, Coweta, Oklahoma, Son Kyle and wife, Andrea Littlehead, Broken Arrow, Oklahoma, Son, Christian Littlehead, Moore, Oklahoma, Grandchildren; Jaden, Isaac, Jaci and Viola, Brother, Mitchell Littlehead, Coweta, Oklahoma, Sister, Shelley Yargee, Coweta, Oklahoma, Brother Jay and wife, Carlena Littlehead, Kiefer, Oklahoma, and Mother, Shirley, of the home. Jim was preceded in death by Brother, Matthew Littlehead, Father, Jimmy Littlehead, and Brother, Marty Littlehead.

Jim Whitman Littlehead-a father, a child of God, and a friend to all-was called home on July 12th, 2021. He was 53 years old. Born May 21st, 1968 in Claremore, Oklahoma to Jimmy and Shirley (McIntosh) Littlehead, Jim, although much reserved,... View Obituary & Service Information

The family of Jim Littlehead, Jr. created this Life Tributes page to make it easy to share your memories.

Jim Whitman Littlehead-a father, a child of God, and a friend...

Send flowers to the Littlehead, family.