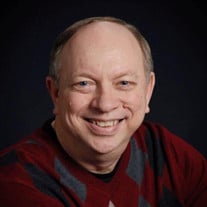 James Robert Cowan was born in Fayetteville, Arkansas on September 24, 1956 to James K. and Mona L. (Patrick) Cowan. He passed on Tuesday, May 25, 2021 in Broken Arrow, Oklahoma at the age of 64. Jim lived in Fayetteville, AR., in his early childhood years, before moving to Pittsburg, KS., where he was a high school graduate. He continued his education at Pittsburg State University in Pittsburg, KS., obtaining an EFT-Respiratory Therapy Associate Degree. Vocationally he worked for the Mazzio’s Corporation for 40 years, serving in a variety of management roles. He ended his career as Director of Supply Chain and Culinary Research. One of his greatest accomplishments was the development of ‘Mazzio’s Calzone’. He loved the Mazzio’s organization and the Ken Selby family. He appreciated their support throughout his 16-year journey with cancer. Jim had an “award winning” chili recipe. He loved to cook and it showed in his career achievements. When it came to sports, Jim was an avid football fan, participating in the infamous “Fantasy Football” leagues with his family. He also had season tickets for his favorite team, University of Arkansas Razorbacks, but was known to cheer for Tulsa University as well. Jim was a faithful member of Kirk of the Hills Church. He loved his church family and it was expressed in his many expressions of faith and servanthood. He seldom missed a Sunday service at the contemporary worship and Wednesday morning bible study. As Jim grew in his faith, he took on leadership responsibilities first serving as a greeter and then eventually became the deacon over the entire hospitality ministry of the church for two three-year terms. A post he occupied until he went home to be with his Lord. He was also a leader of the Divorce Care ministry for many years - using his own experience as a means to help others to heal and trusting in the LORD. Even as he suffered with cancer, Jim was always first to the church and waiting in his scooter at the doors to greet people and make sure everything was prepared for God’s people to worship. Jim is now serving in that Heavenly Temple in the very presence of his LORD Jesus Christ. To carry on his legacy of love, Jim is survived by, Sons, Matthew G. Cowan and James C. Cowan both of Broken Arrow, OK., and his amazing granddaughters, who were the joys of his life, Makayla Cowan and Taylor Cowan, both of Broken Arrow. Jim was number four of five siblings, survived by, Rick Cowan (wife Sandy), Don Cowan (wife Cheryl) Debi Hunt (husband Richard) and Lisa Premo (husband Mark), and twelve nephews and nieces. He was preceded in death by his parents. Jim was a dynamic servant of God, who cared more about others than he did himself. He will forever live-on in our hearts and lives, as one who was faithful to the end. He is very loved and will truly be missed. In lieu of flowers, the family would like to encourage you to give gifts of love to the Kirk of the Hills Church for their Divorce Care ministry and other ministry programming for meeting the needs of others. The Life Celebration service for Jim will be Friday June 4th at 1:30 PM at Kirk of the Hills Church in Tulsa, OK. A family graveside service will be June 5th at Savoy, Arkansas.

James Robert Cowan was born in Fayetteville, Arkansas on September 24, 1956 to James K. and Mona L. (Patrick) Cowan. He passed on Tuesday, May 25, 2021 in Broken Arrow, Oklahoma at the age of 64. Jim lived in Fayetteville, AR., in his early... View Obituary & Service Information

The family of Jim Cowan created this Life Tributes page to make it easy to share your memories.

James Robert Cowan was born in Fayetteville, Arkansas on September...

Send flowers to the Cowan family.