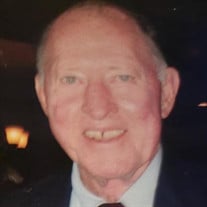 Graveside funeral services for Jerry Stevenson have been scheduled for 2:00 PM, Wednesday, March 24, 2021 at Park Grove Cemetery in Broken Arrow, Oklahoma. Pastor Jeff Gill of Northside Christian Church will officiate. Services are under the direction of Hayhurst Funeral Home. Jerry Eugene Stevenson was born on Thursday, April 20, 1939 in Broken Arrow, the son of William Coffman and Tommie (Johnson) Stevenson. He went to be with the Lord, Thursday, March 18, 2021 at 81 years of age. Jerry was a 1957 graduate of Broken Arrow High School. He continued his education at Northeastern State University in Tahlequah, Oklahoma. In his early adulthood, he was drawn toward being a teacher with the aspiration to be a football coach and was a veteran of the Air National Guard. However, in 1967 he joined his older brother, Jim, in the family business of Yale Cleaners and was a loyal contributor to its success until his retirement a few years ago. Jerry had a generous spirit which led him to participate with meals on wheels and Rotary Club of Broken Arrow and was a lifelong, dedicated member of Northside Christian Church. Jerry was married to Kay Barnes on April 12, 2003 surrounded by family in Eureka Springs, Arkansas. He loved spending time with his family and attending church, but also had a competitive side that contributed to his love for sports, and he even played basketball in the church league into his 50’s. He especially loved the game of golf and fortunately lived 40 years of his life on the Indian Springs Golf Course allowing him to play often. He will forever be remembered and missed by all his loved ones affectionately knowing he is watching over us from heaven. Jerry is survived by, Sisters, Verna Faye Bebout of Broken Arrow, OK & Edna Jo Steigall of Dallas, TX Wife, Kay Stevenson, of the home Daughter, Jan Stevenson, Jenks, OK Step Daughters, Tina and K Kendall, Broken Arrow, OK Jennifer Conine and Bryan Mason, Coweta, OK Step Son, Ty and Valerie Conine, Inola, OK Grandchildren, Elisia, Braden, Kaleigh, Colton and Lori, Luke, Alyssa and Matthew Great Grandchildren, London, Izzy, Leo, Roman, Matthew and Elliana Jerry was preceded in death by his parents, W.C. and Tommie, brothers, Gerald and Jim and sister, Billie Lee. The family requests memorials to: Northside Christian Church 1221 North Elm Place Broken Arrow, OK 74012

The family of Jerry Stevenson created this Life Tributes page to make it easy to share your memories.

Graveside funeral services for Jerry Stevenson have been scheduled...

Send flowers to the Stevenson family.