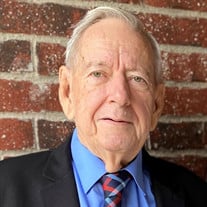 Jerry was born in Numa, Iowa on Tuesday, July 23rd 1940 and he went home to Heaven on Wednesday, December 2, 2020 at the age of 80. Jerry was born the youngest of four children to Claude and Ethel Lepper. His family moved to Broken Arrow from Iowa in 1942 when Claude started work at the McNabb Coal Company in Catoosa, Ok. In 1948 at the age of eight, Jerry moved to Okmulgee and attended Emerson elementary and the start of middle school. He would often tell of his days playing baseball and walking the railroad tracks with his friends into downtown Okmulgee to watch a baseball game. In 1953, the family moved back to Broken Arrow, Oklahoma, where he attended the rest of middle school and high school. Many of his classmates from this time in life remained his lifelong friends and companions. He often would recall stories of himself and his friend Bill York running around with their scooters or racing on the go cart track out at midway on Highway 51. He developed an early love for racing that followed him into his car driving years. He spoke most of his Studebaker with the Golden Hawk engine that was essentially a street legal racing car. He told the story more than once that he never determined exactly how fast he drove the car due to the speedometer ended with extra gears to shift up. His love for racing eventually moved into late model stocks at the Tulsa Speedway in the mid 60’s. Jerry graduated from Broken Arrow High School in 1958 and then attended college at Bethany Nazarene (Southern Nazarene) and then for a short time later at Okmulgee Tech. In 1960 Jerry met the love of his life (Joyce Harvey) while they were both “cruising” the parking lot with friends at Cottons drive- in. Jerry and Joyce married in 1964 in the Assembly of God Church in Broken Arrow. Jerry joined the Oklahoma Air National Guard and served 4 years with the reserve in Tulsa. In 1968, when Jerry was 27 years old, Joyce and Jerry started their family with the birth of their first son Derrick, and 6 years later in 1974 their second son Marc was born. They raised both their sons in Indian Springs in Broken Arrow. Jerry worked hard at providing the best for his family. He placed his wife and two sons at the top of his priorities throughout his life turning down opportunities that would have required his family to move. He was a great father to their two sons, Derrick and Marc. When he was on a business trip, he would fly home or drive all night to make sure he didn’t miss a football game or other activity that was important to them or sometimes just to sleep next to Joyce. Jerry was a lifelong entrepreneur, and enjoyed the excitement of creating new companies. In 1969 Jerry started his independent insurance agency and operated his office during the week but on the weekends would travel the countryside with the singing group called the Travelers, singing lead for the group. He later sold the agency to Louis Blosch. In 1971 he co-operated a recording studio with his good friend David Ingles. The studio located in Tulsa, Oklahoma was successful and recorded many of Tulsa’s artist and musicians of the time. Jerry later co-started a music distribution company with his brother John Lepper and together they grew the business into a successful nationwide company that sold Christian Records, Tapes and Sheet Music. And finally, Jerry worked with his two sons Marc and Derrick at Omni Distributing and was an intricate part of its operation until his final retirement in 2015. During their 56 year marriage, Jerry and Joyce were lifelong members of the Assembly of God Church in Broken Arrow, where they were married, and loved to travel together. And, they traveled extensively. They collected memories of over 70 plus cruises, hundreds of hours in planes, trains and automobiles both in the US and overseas but one thing was constant: they were always together. No matter how much they traveled, or worked through the years, they always made time for each other and their family. Joyce preceded Jerry in death a mere 89 days, passing on Thursday, September 3, 2020. We have no doubt that Joyce was waiting on Jerry when he ascended to Heaven, with a cup of coffee, and ready to visit and move on to their next great adventure together. Jerry loved his family and friends and was an amazing, kind and considerate person that will be greatly missed by all that have known him. ​Jerry is survived by; Sons, ​​​ Derrick and wife Karla Lepper, Bixby Marc and wife Amy Lepper, Tulsa, OK Grandchildren,​ Danielle Harris, Ashley Lepper and Allison Lepper Older Brother, ​​John Lepper of Broken Arrow, Oklahoma He was preceded in death by his parents, Claude and Ethel Lepper; his wife, Joyce; a brother, James, and a sister, Wanda.

Jerry was born in Numa, Iowa on Tuesday, July 23rd 1940 and he went home to Heaven on Wednesday, December 2, 2020 at the age of 80. Jerry was born the youngest of four children to Claude and Ethel Lepper. His family moved to Broken Arrow from... View Obituary & Service Information

Send flowers to the Lepper family.