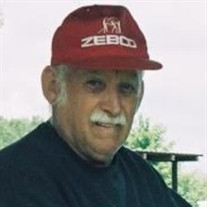 Services will be scheduled at a later date. Jerry Davidson was born on Thursday, November 19, 1931 in Ringwood, Oklahoma to Dan and Susie (Hamen) Davidson. He left this life to spend eternity with Jesus on Monday, January 18, 2021 at the age of 89 in Tulsa, Oklahoma. He lived a good life and will be missed by many. Jerry was raised in the Ringwood Community and graduated from Ringwood High School in 1950. On April 28, 1956 he married Betty Ogden, and their family has grown to include two children, five grandchildren and seven great-grandchildren. Jerry was a machinist by trade for over 20 years while living with his family in Mesquite, Texas. In 1975, he moved his family back to Ringwood and became a partner with his brothers operating Davidson Construction. They were known for their quality cement construction and did work all over Oklahoma and the surrounding states. Jerry served as a deacon of 1st Baptist Church of Ringwood, for many years and was instrumental in the new church building project to which he devoted many hours. Jerry’s hobbies included metal detecting, where he enjoyed finding both oddities and treasures. He enjoyed playing cards and dominoes with his family and friends. Jerry also liked to water ski and fish with his family in the many lakes in Texas and OK, especially Canton Lake. Later in life, he began doing woodwork making many beautiful things from the black oak trees that are so abundant in the Ringwood area. He always enjoyed the opportunity to see his siblings and grandchildren. Jerry had a good time traveling around the country with his family, and especially enjoyed the Alaskan cruise he took with Betty. He was an avid Dallas Cowboy fan since they became a team in 1960. Jerry was a great gardener known for raising delicious watermelon, cantaloupe, honeydew melons, tomatoes and much more. These often became entries in or were donated to the annual Ringwood Watermelon Festival. He and Betty moved to Broken Arrow, OK in 2010 to be closer to their children. There they became members of Florence Street Baptist Church. He is survived by, Wife, Betty Davidson of Broken Arrow, Oklahoma Son, Tim Davidson & Bobbi of Muskogee, Oklahoma Daughter, Karen Dello Iacono & Thomas of Broken Arrow, Oklahoma Grandchildren, Krystal Davidson, Bo Dello Iacono, Alex Dello Iacono, Dominica Dello Iacono, Adan Dello Iacono, Great-Grandchildren, Trevor Williams, Abigail Short, Dustin Short, Trisa Atkinson, Xander Dello Iacono, Max Dello Iacono, Jaxon Dello Iacono Siblings, Lorene Henry, Boone Davidson, Max Davidson, Wayne Davidson, Shirley Pekrul, Carolyn Mays Preceded in death by parents, brothers, John Davidson, Don Davidson, Ted Davidson, Danny Davidson and sisters, Velta,Mitchell, Velma Meeks, Veldene Holden, and Kay Shankle In lieu of flowers, please consider a donation to: The Missions Fund Florence Street Baptist Church 200 W Florence Street Broken Arrow, OK 74011

Services will be scheduled at a later date. Jerry Davidson was born on Thursday, November 19, 1931 in Ringwood, Oklahoma to Dan and Susie (Hamen) Davidson. He left this life to spend eternity with Jesus on Monday, January 18, 2021 at the... View Obituary & Service Information

The family of Jerry Davidson created this Life Tributes page to make it easy to share your memories.

Services will be scheduled at a later date.

Send flowers to the Davidson family.