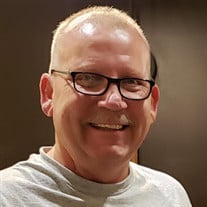 Jeff Stevens was born in Tulsa, Oklahoma on Monday, July 9, 1962 the youngest of three children to Ted and Sharon (Russell) Stevens. He passed from this life on Sunday, October 18, 2020 in Tulsa at the age of 58. Growing up, Jeff’s family moved to several different places as his father worked for Polaroid and Kimberly Clark. Jeff’s family moved around the Midwest and by the time Jeff reached high school, they had settled in Tulsa and he played varsity football for Union High School, graduating in 1980. He and Sherri met in high school and married on May 4, 1985 in Broken Arrow, Oklahoma. He spent time with his two boys coaching their football and soccer teams. Jeff also loved to fish, with his best friend, Craig, especially in farm ponds very few others knew about. He taught his boys how to fish and they enjoyed time at the ponds or lakes together. He and Sherri were season ticket holders to Broken Arrow Tiger Football, even past the time they knew any of the players personally. He also followed all the Oklahoma football teams, OU, OSU, TU, as well as, the Dallas Cowboys. Jeff was the Parts Manager for Land Rover for 18 years and won many corporate awards that allowed Sherri and himself to travel internationally. He will be missed by all who loved him and those he loved. Jeff is survived by: His wife, Sherri of Broken Arrow, Oklahoma Son, Patrick Stevens of Broken Arrow, Oklahoma Son, Parker Stevens of Tulsa, Oklahoma Brother, Douglas Stevens of Houston, Texas Sister, Kathy Berry and her husband, “Cherry” of Arlington, Texas And numerous nieces and nephews. He was preceded in death by his parents: Ted and Sharon Memorial donations may be made to BARC – Broken Arrow Rescue Corporation 1308 S. Juniper Avenue Broken Arrow, OK 74012 OR Broken Arrow Neighbors 315 W. College Street Broken Arrow, OK 74012

Jeff Stevens was born in Tulsa, Oklahoma on Monday, July 9, 1962 the youngest of three children to Ted and Sharon (Russell) Stevens. He passed from this life on Sunday, October 18, 2020 in Tulsa at the age of 58. Growing up, Jeff&#8217;s family... View Obituary & Service Information

Send flowers to the Stevens family.