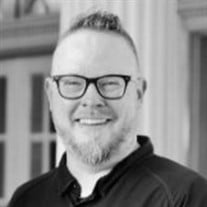 Jason Kelly Stewart traded his earthly body for a heavenly one on Wednesday, July 7, 2021 in Tulsa, Oklahoma at the age of 45. Jason was born in Tulsa, Oklahoma on Wednesday, October 22, 1975 to parents Kennith and Donna (Williford) Stewart. A 1993 graduate of Grace Fellowship Christian School, Jason met his wife, Samantha (Olin) Stewart while in high school and they married on September 27, 1997. Together, they had one daughter, Abby. Jason’s greatest passion was his family. He loved taking Samantha and Abby on road trips especially to Florida and the National Parks. A guitarist, Jason loved music, especially 80s and 90s heavy metal. Jason had an incredible sense of humor. His dry wit, twinkle in his eye and sly grin easily appeared when he was up to something. He and Samantha were members of Tulsa’s Church on the Move. Jason deeply loved Jesus and studying God’s word. A pioneer in graphics and web design, Jason’s expertise in User Experience strategy and design was called on by many Tulsa-area businesses. A few of his significant career highlights include creating one of the first online pizza ordering systems for Domino’s and Garth Brooks’ first website. Jason’s creative and technical expertise was well known in the Tulsa-area design community. Throughout his career, he led branding, online and design work for Williams, NORDAM, Billy Simms BBQ, Easy Worship, Triad IMS, and Lawyer Marketing Services. Most recently, Jason was the Manager of User Experience and Web Development at Global Holdings LLC of Tulsa. Jason is survived by his wife, Samantha (Olin) Stewart of Broken Arrow, daughter, Abby Stewart of Broken Arrow, parents Kennith and Donna (Williford) Stewart of Tulsa, brother, Jonathan and wife, Leslee (Young) Stewart of Frisco, Texas, nephews, Rinner and Camden Stewart of Frisco, Texas, as well as extended family and dear friends. He was preceded in death by his grandparents, Glendon and Bessie (Haney) Stewart, Thurman and Betty (Gifford) Williford, and uncle, Randy Williford. In lieu of flowers, the family requests donations be made to the Lincoln Christian School Endowment Fund in honor of Jason Stewart: https://lincolnchristianschool.com/endowment A memorial service will be held on Wednesday, July 14 at 10 a.m. at the Oneighty building at Church on the Move, 1003 N. 129th East Ave., Tulsa, OK 74116.

The family of Jason Stewart created this Life Tributes page to make it easy to share your memories.

Jason Kelly Stewart traded his earthly body for a heavenly one...

Send flowers to the Stewart family.