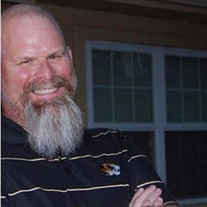 Jason David Nichols passed away in his Broken Arrow home on Monday, June 1, 2020 after a long battle with ALS. Jason was born to Randy and Judith (Murry) Nichols on Saturday, August 9, 1969 in Tulsa, Oklahoma. He was a member of the First United Methodist Church in Broken Arrow, Oklahoma. Jason was raised in Locust Grove and Fort Gibson along with his younger brother, Jacob. He graduated from Fort Gibson High School in 1987 where he was a member of the varsity football team, played in the school band, and was active in school plays. From there, he went on to Northeastern State University in Tahlequah, where he met the love of his life, Robyn. Jason earned a degree in nursing and was a Registered Nurse in the state of Oklahoma. His nursing career was spread out over many different hospitals in the Tulsa area. Jason and Robyn were married on September 26, 1992 in Tulsa. They have two children, Claire (age 20) and Justin (age 17) Jason did everything in his life with passion. He was a lifelong fan of the Kansas City Chiefs. He loved spending his fall weekends at the deer lease and at Oklahoma State football games. As his children grew older, he discovered his greatest passion - coaching youth sports. From basketball to football, soccer and lacrosse, Jason coached multiple teams and influenced the lives of many young men and women in the Broken Arrow community. Jason’s vision was the catalyst for the establishment of the Broken Arrow High School Lacrosse Club, where he served as a coach and program director. He treated every kid on every team just like they were his own. Jason was diagnosed with ALS at the age of 40, but he never let it slow him down. He continued to work full-time until 2019. He also traveled frequently for family vacations, lacrosse tournaments, and to watch his daughter’s college basketball games. Jason packed a lot of living into fifty short years of life, and he will be missed by many. A Memorial Service will be held on Saturday, June 13th at 11:00am on the practice fields at Neinhuis Park. Dress is casual and please bring lawn chairs. Players who were previously or currently coached by Jason, you are encouraged to wear your team specific jerseys. In lieu of flowers, please donate to the Jason Nichols Memorial Fund to help offset player fees in upcoming seasons. https://www.gofundme.com/f/jason-nichols-memorial-scholarship-fund?utm_source=customer&utm_medium=copy_link&utm_campaign=p_cf%20share-flow-1&fbclid=IwAR0YWSPMk7JSM_4oFrzh1Z9ivYju8dfHgdt1r4i8XBPWGd9k5ZXtbaCD1o0 Jason is survived by, Wife, Robyn of Broken Arrow Daughter, Claire of Winfield, Kansas Son, Justin of Broken Arrow Brother, Jacob, wife Lindsay, and son, Aaron of Fort Gibson Father, Randy, and wife, Carol of Fort Gibson And numerous aunts, uncles, nieces, nephews, and cousins Jason was preceded in death by his mother, Judith.

Jason David Nichols passed away in his Broken Arrow home on Monday, June 1, 2020 after a long battle with ALS. Jason was born to Randy and Judith (Murry) Nichols on Saturday, August 9, 1969 in Tulsa, Oklahoma. He was a member of the First United... View Obituary & Service Information

The family of Jason Nichols created this Life Tributes page to make it easy to share your memories.

Jason David Nichols passed away in his Broken Arrow home on Monday,...

Send flowers to the Nichols family.