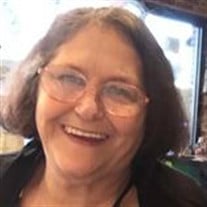 Janice was born on Wednesday, February 10, 1954 in Paris, Texas. Her parents were James Curtis and Juanita Gifford. She was married to James Stephen Wray (Steve) of Paris, Texas. She passed from this life to her eternal home in heaven on Monday, March 29, 2021 in Tulsa, Oklahoma at the age of 67 surrounded by her loving family. Janice attended school in Paris and became involved in riding and training horses alongside her father. They were members of the Paris Rodeo Club and participated in many club-sponsored events. Janice graduated from Paris High School in 1972. She worked various odd jobs during high school and at age 18 became the youngest manager of a Church’s Fried Chicken in the State of Texas. A certain young man attending a nearby college and working as an ambulance driver began to frequent Church’s Chicken. Steve Wray liked the chicken but fell in love with the manager. They dated for two years and then married on December 20, 1974. The two moved to Dallas for Steve’s first job with Dallas Police Department. Their first daughter Gwendolyn was born while they lived in Dallas. In 1978, they moved to Philadelphia/New Jersey where Steve pursued a career in Federal Law Enforcement. Their second daughter, Brenda, was born in New Jersey. In 1983, they were transferred back to Fort Worth, Texas where their third daughter Julia and their son James Aaron were born. Janice was involved in PTA, a home room mom, a girl scout leader and supported her children in all their activities inside and outside of school. Hers was the home that her children’s friends all loved to come to and many of them still to this day call her “mom”. One of their favorite family vacations was to Galveston Beach in Texas. Janice loved to collect shells early in the mornings and spend time with her family there. As her children got older, Janice began working in hospitals in Texas and Oklahoma where the family moved in 1992. She also managed a family-owned convenience store in Broken Arrow called Peep’s. Her last job before her own retirement was as a Unit Secretary for St. Francis Hospital in Tulsa. Upon retirement, she and Steve enjoyed taking their camper to Beaver’s Bend to trout fish there with friends. They also made a trip to Europe which Janice thoroughly loved. Known as “Gerda” by her six grandchildren who were her pride and joy, she could not spend enough time with them or spoil them nearly enough. She thought each of them “hung the moon” and they felt the same way about her. When asked to describe Janice, her family used words like loving, generous, motherly, fun, independent, strong-willed, determined, and a woman of faith. She loved being surrounded by her family, who will miss her dearly. In lieu of flowers, the family suggests a memorial gift to: St. Jude Children’s Research Hospital at www.stjude.org Janice is survived by: Her husband, Steve of Broken Arrow Daughter, Gwendolyn Latus and her husband, John of Broken Arrow Daughter, Brenda Honeycutt and her husband, Tom of Fort Knox, Kentucky Daughter, Julia Wray of Broken Arrow Son, James Wray and his wife, Melanie of Los Angeles, California Grandchildren: Savannah Honeycutt, Audrey Latus, Charlotte Honeycutt, Lexie Honeycutt, Wyatt Latus and Josie Honeycutt She was preceded in death by her parents, Curtis and Juanita Gifford

Janice was born on Wednesday, February 10, 1954 in Paris, Texas. Her parents were James Curtis and Juanita Gifford. She was married to James Stephen Wray (Steve) of Paris, Texas. She passed from this life to her eternal home in heaven on Monday,... View Obituary & Service Information

Send flowers to the Wray family.