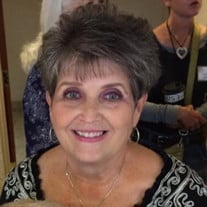 Janet Deloris (McDougal) Collier was born at home, on October 18, 1941 to Eugene (Gene) and Maxine (Bivins) McDougal, in Broken Arrow, Oklahoma. After a 3-year battle with cancer, Janet passed away in her home on January 31, 2022 surrounded by her loving family. Janet graduated from Broken Arrow High School in 1959. With her outgoing personality, she made many friends who have remained life-long friends to this day. She was a carhop at Frank’s Drive-In and wanted to work there in order to see and talk to everyone, though she only made 50 cents a day! After meeting the love of her life in 1958, Janet and Johnny Collier were married on November 20, 1959 at the Assembly of God Church in Broken Arrow with Pastor James C. Dodd officiating. Their marriage was blessed with the addition of their three children Johnny Brad, Joannie Jeannine and Todd. Family was everything to her and she loved and adored her children, grandchildren, and great-grandchildren. If their home was Johnny’s “castle” Janet was the Queen of that castle in every way. She was named “Honey” in 1988 by her first grandchild Whitney, as that is what Johnny called her. Janet worked in the medical field, working for Dr. Coder and Dr. Ferguson as a tech assistant and later at Springer Clinic as a phlebotomist. She later had a long career at TV Guide (previously Superstar Connections) and retired as the Lead Training Manager in 2002. Originally working as a troubleshooter for the network, she saw the need for a Training Department and approached the owner about developing the training program and telling him that she was the person to do the job. She wrote the training manual and procedures, trained new employees and subsequently trained additional trainers as the company grew. After retiring, Janet enjoyed many activities. Being the creative person that she was, she enjoyed crafting, ceramics, scrapbooking and making her own personal greeting cards for everyone she knew for every special occasion. Every person that she made cards for will assuredly treasure them. In her last few days, she managed to find the strength to make a special Christmas card for her grandson, Jake. Her most recent project was making personalized coffee mugs and thank you cards for the Broken Arrow police officers who were in the Honor Guard and participated in Johnny’s funeral service. It was many hours of work and an expression of her deep appreciation for their service. Janet had a deep commitment and love for our town of Broken Arrow. She was involved in supporting everything Broken Arrow: *Broken Arrow Historical Society *Broken Arrow Alumni Association *Fundraising for Veteran's Park *Fundraising for Statues for both Coach Robinson and Principal Ragsdale at Kirkland Field *Helping create the just released book “Broken Arrow’s Top 100 People" with many hours of research and writing *Created Facebook page “Remembering All things Broken Arrow” *Worked on class reunions for class of 1959 *Set up Facebook page for Class of 1959 Janet was preceded in death by her parents and by her husband of 62 years in August of 2021. She is survived by: Children: Brad Collier and wife Debi of Broken Arrow Todd Collier and wife Andrea of Broken Arrow Joannie Carson and husband, Lonnie of Broken Arrow Grandchildren: Collier Whitney Anderson and husband Mika of Adair, OK Chase Collier and wife Janelle of Broken Arrow Marin Collier of Broken Arrow Cameron Carson of Broken Arrow Natalie Grace Collier of Broken Arrow Kristen Passmore and husband Curtis Jake Dzeda of Broken Arrow Great Grandchildren: Peyton Anderson of Broken Arrow Saylor Anderson of Adair Wyatt Allen of Broken Arrow Dalton Allen of Broken Arrow Emerson Passmore of Broken Arrow Sister: JoAnn Garrison and husband Michael of Broken Arrow Janet will be remembered by everyone who knew her as loyal, with the most witty sayings, charming personality and with a caring, loving heart. She will be remembered for her words of wisdom, strength and her deep devotion to the people she loved. We love you whether we called you ”Mom, Honey, Janet or friend”, and for us you will always be Miss Broken Arrow!

Janet Deloris (McDougal) Collier was born at home, on October 18, 1941 to Eugene (Gene) and Maxine (Bivins) McDougal, in Broken Arrow, Oklahoma. After a 3-year battle with cancer, Janet passed away in her home on January 31, 2022 surrounded... View Obituary & Service Information

Janet Deloris (McDougal) Collier was born at home, on October...

Send flowers to the Collier family.