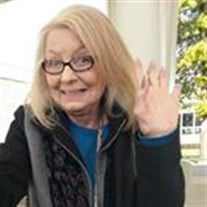 Melody “Jane” Maureen Mollahan Sloan was born to Mary Jean Gariss and Charles Mollahan in Chicago, Illinois on January 23rd 1946. However, to everyone she knew and loved, she was known simply as “Jane.” She grew up on her grandparent’s farm in Clay Center, Kansas with her sister, Cheryl, and spent her summers on her Aunt Bonnie and Uncle Nick’s farm in Bland, Missouri. This is where her love of animals began and henceforth she was rarely seen without a dog on her lap or curled up by her side. She never turned away a stray and many deemed her the “dog whisperer.” Jane started her family early, and married her first husband, James Hooke in January of 1963. Later that year, she gave birth to her first child, Tina, who would be the first of many to come. In 1964, she married Richard Craig who would father seven more beautiful children to add to their family—Britni, Julie, Chris, Jaret, Kristi, Mandy & Chandra. Her children blessed her with 17 loving grandchildren—Kyndall; James, Chelsey, Shawn, Cory, Brett, Brielle; Caleb; Challen, Kirsten; Jude; Jenna, Ryann; and Mason plus step grandchildren Jordann, Baylee & Preston. Growing up, Jane’s grandparents raised her in the baptist church, which was all about community. Jane was a giver in every sense of the word. Her house was always open to everyone, including friends of her children, who often voiced that her home was thought of as their second home. Jane always said that she was raised to believe that giving to others is just what you do, and she loved doing so. She was someone who routinely gave money and food to people on the streets who had nothing and never thought twice about it. Though she was unable to finish high school the traditional way, she decided as her children grew up to acquire her GED, and continue on to study at Tulsa Junior College in their nursing program. She graduated from nursing school in 1993 and set out excited about fulfilling her true calling in life - helping others. After her children grew up and started their own families, she found happiness once more with James Sloan, whom she called “the love of her life.” They were married in 1999 and had too few years together before his untimely death. It was after this tragedy that she dedicated herself into making sure she could be the best mother, grandma and friend to everyone she could as there was no guarantee how long she would have with them. Jane was not your typical mother or grandma. While she loved to garden, antique shop and sew, she also loved to indulge in a good dessert, throw as many parties as possible and of course, drive around in her Hummer. She often said her favorite holidays were Halloween and Thanksgiving because it brought her family close. Jane was known far and wide as the actual, “Halloween Queen” because of her unforgettable, detailed costumes and her yearly parties that everyone looked forward to all year long. Jane was passionate about people: being a nurse, a mom, and a grandma, she spent her whole life caring for people. She was always happiest when her kids and grandkids were all together with her. She loved bringing people together and you could almost always find her spending time in her gorgeous backyard, surrounded by family, friends and of course, her dogs. Family was the most important aspect of Jane’s life. She loved her family relentlessly, unconditionally and took pride in being there when anyone needed her. One thing that stayed with her from childhood was her stubborn commitment to love and help others until her final days. Even when she was diagnosed with cancer and life became especially hard for her, she shifted her focus to her job as a nurse and her job as the heart of the family to make sure everyone felt valued and supported. One word to sum up Jane would be, “resilient.” Jane lived through many struggles but remained strong for her family and her great love for each and every one of them.. Jane passed away after a long, hard battle with cancer and Covid on Sunday January 3rd, 2021, in Tulsa, Oklahoma. She left this world surrounded by all eight of her children and many grandchildren. Though this virus took her away far too soon, it is Love that kept Jane strong through this life and Love is the legacy she will leave in each of our hearts.

Send flowers to the Sloan family.