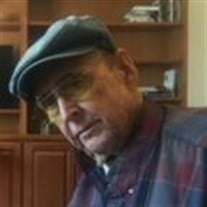 James (Jim) Lee Jackson, 88, of Oklahoma City passed on to the life hereafter in the early morning hours of Thursday, July 22nd, 2021. He died full of spirit and thankful for a long and happy life. He was born July 16th, 1933, in a Magnolia oil camp in Quay, OK, to Lawrence Lee Jackson and Agnes Drexie Jones Jackson, both of whom moved to Oklahoma from West Virginia. He grew up in Yale and Shidler, OK. He was a proud alumnus of Shidler High School and remained active in the SHS Alumni Association. He served in the United States Army 1st Engineers Battalion during the post-WW II reconstruction of Germany (1953-1956). He held a degree in early childhood education from Washburn University (Topeka, KS). He was the loving husband of Connie Mae Vann Jackson, to whom he was married from 1956 until his death – almost 65 years. He retired from Blue Circle Cement Co. (now Central Plains Cement of Tulsa) in 1998 after working for over 30 years as a regional salesperson. He was an active member of Covenant Presbyterian Church in OKC for over 40 years, serving faithfully on both the Board of Elders, the Board of Deacons, and the Building Committee, and enjoying many close friends in the congregation. He was also active with his wife in the church choir where he enjoyed the unofficial title “Choir King.” Jim was loved by many for his big heart, broad smile, and strong hugs, his way with words, his rich laugh, and ironic sense of humor, and the many, many stories and songs he loved to share and sing. To his children, he was a devoted father who cherished his family and enjoyed time with them above all else. He cared for them with all he had. He enjoyed whistling, big cars, road trips, vacations at the lake, good cooking, and Bob Wills and the Texas Playboys. He was proceeded in death by his parents and by many cousins he loved as brothers and sisters. He is survived by two sons and a daughter: Lee Neele Jackson and wife Dee of Coalgate, OK; Vann Jackson and wife Cyndi of Broken Arrow, OK; and Dr. Rachel Constance Jackson of Norman, OK. He had four grandchildren: Jonathan Lee Jackson and wife Linsay of Oklahoma City; Joni Foster of Coalgate, OK; Haleigh Wisotsky and husband Emerson of Jenks, OK; and Shelby Jackson of Oakland, CA. He had two great grandchildren: Treyvin Foster and Wyatt Wisotsky. His strength and love, his stories and songs live on in the hearts and memories of his family and friends who will carry them on. He will be missed deeply and treasured forever. Graveside services were held at Grandview Cemetery in Kaw City, OK, at 9:30 a.m. on Tuesday, July 27th, and a memorial service was held that afternoon at 2:00 p.m. at Covenant Presbyterian Church – 10100 Ridgeview Dr., OKC, 73120. Services were conducted by Hayhurst Funeral Home. The memorial video as well as audio recording of both services can be found at Jim’s obituary page on the Hayhurst website under the “Photos & Videos” tab. Cards may be sent to the family through the church. Memorial donations may be made to the American Heart Association or the Covenant Presbyterian Church music ministry

James (Jim) Lee Jackson, 88, of Oklahoma City passed on to the life hereafter in the early morning hours of Thursday, July 22nd, 2021. He died full of spirit and thankful for a long and happy life. He was born July 16th, 1933, in a Magnolia... View Obituary & Service Information

The family of James Jackson created this Life Tributes page to make it easy to share your memories.

Send flowers to the Jackson family.