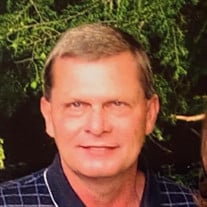 James Earl Hitchcock was born Monday, November 15, 1953 to James Earl and Betty (Holt) Hitchcock in Tulsa, Oklahoma. He gained his Heavenly wings on Monday, February 22, 2021 in Tulsa, Oklahoma at the age of 67. He is in the care of Hayhurst Funeral Home. James graduated from Will Rogers High School in May, 1972. He started dating his loving wife Dena Heape in the 8th grade; they were married on March 17, 1973 in Tulsa, OK. For nearly 48 years they had the most amazing Godly marriage that was envied by all. They moved to Broken Arrow, OK where they raised their 3 children. He was an electrician by trade and worked for Ford Glass Plant for 37 years. James was a devoted & loyal family man and friend to many. He considered his wife, children, and grandchildren his greatest gifts. He loved so many nieces, nephews and cousins as his own. He enjoyed going for drives to discover new roads and new places. He loved feeding birds, watching wildlife and had a great appreciation for every detail of God’s creation. James loved the game of golf and loved playing with his life-long friends. He was full of knowledge and wisdom and always had sound advice when sought out. He loved God and was a quiet servant, helping others any way he could. He will be deeply missed by his family and many more. James is survived by, Wife, Dena Hitchcock of Broken Arrow, Oklahoma Daughters, Lisa Humphrey and Patrick of Broken Arrow, Oklahoma Leslie Humphrey and Philip of Tulsa, Oklahoma Son, Alan Hitchcock of Broken Arrow, Oklahoma Grandchildren, Taylor Humphrey, Cole Humphrey, Colton Hitchcock, Blakely Humphrey, Breaker Humphrey, Hope Humphrey, Emilee Houck, Zack Houck Father-In-Law, Tommy W. Ihrig of Tulsa, Oklahoma Brother, Russell Woods of Tulsa, Oklahoma Sister, Linda Mares of Tulsa, Oklahoma In-Laws Brenda White and David of Bixby, Oklahoma Alice Houck of Broken Arrow, Oklahoma Preceded in death by parents James and Betty, mother-in-law, Peggy Ihrig.

The family of James Hitchcock created this Life Tributes page to make it easy to share your memories.

Send flowers to the Hitchcock family.