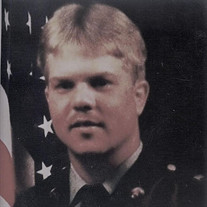 James Warren Henderson was born to Warren and Betty (Cohee) Henderson on Monday, November 16, 1964. Jimmy passed from this life on September 6, 2020 in Tulsa, Oklahoma. Jimmy was a good athlete growing up and both wrestled and played football at Union High School in Tulsa, graduating from there in 1983. After high school he took some college classes but decided to join the U.S. Army. He served a total of eight years primarily driving armored vehicles and was stationed in Germany during the early part of the Gulf War. He thoroughly enjoyed the outdoors by hunting, fishing, and camping with family and friends. You could often find him in his boat on either Fort Gibson or Tenkiller Lake. He and his brothers played slow-pitch softball as long as their bodies held out. Jimmy loved both NASCAR and Sprint Car racing, and even sponsored a Sprint Car in the Tulsa area. He loved being an uncle and enjoyed family get togethers. You could always find his faithful black lab named Trooper by Jimmy’s side until his beloved dog died two years ago. They would share tacos and other fast food because if Jimmy didn’t bring some home and Trooper smelled food on his breath, he would give him the cold shoulder the rest of the night. Jimmy worked in the Chemical Solutions industry for many years and was the owner/operator of American Bacterial Solutions for the past ten years. He will be missed by his large family and many friends. Jimmy is survived by, Mother, Betty Henderson of Topeka, Kansas Brothers, Gary Henderson and his wife, Sherry of Collinsville Steve Henderson of Tulsa Mike Cook of Topeka, Kansas Scott Henderson of Topeka, Kansas Paul Henderson of Oklahoma City Jay Henderson of Oklahoma City Wade Henderson of Tulsa Perry Henderson of Tulsa Sisters, Pam Haynes of Mannford Cindy Woods of Wichita, Kansas Amanda Henderson of Pryor Daughter, Meghan Henderson of Colorado Springs, Colorado Stepsons, Jake Colvin and Hunter Colvin, both of Tulsa And many nieces, nephews, cousins and friends He was preceded in death by his father, Warren Spencer Henderson In lieu of flowers, please consider a donation to: Wounded Warriors Project at www.woundedwarriorproject.org

James Warren Henderson was born to Warren and Betty (Cohee) Henderson on Monday, November 16, 1964. Jimmy passed from this life on September 6, 2020 in Tulsa, Oklahoma. Jimmy was a good athlete growing up and both wrestled and played football... View Obituary & Service Information

Send flowers to the Henderson family.