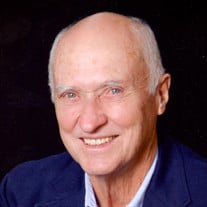 James “Doc” Evert Garrett, Jr. was born in Coweta, Oklahoma on Thursday, August 1, 1935 to James Evert, Sr. and Sara (Hendrix) Garrett. He passed from this life on Tuesday, January 12, 2021 in Tulsa, Oklahoma at the age of 85. Services are under the direction of Hayhurst Funeral Home. James was known by the endearing term of “Doc”. He graduated high school and continued his education obtaining an associate’s degree from NSU in Tahlequah, Oklahoma. He met the lovely Frances Fluke and they married in Broken Arrow, Oklahoma on October 24, 1981. They had six children, 13 grandchildren, and 5 great grandchildren. He loved them all dearly. Doc was a devout Man of God. He attended and was a member of the Broken Arrow Church of Christ. He drove the van for the “Golden Agers” group at church. Doc was a very caring man and often bought cars for those in need so they could get back and forth to work. He never met a stranger and was an asset to the community. Doc is survived by: Wife, Frances Garrett of Broken Arrow, Oklahoma Daughter, Vickie Garza and Ramon of Tulsa, Oklahoma Son, Gregg Garrett and Leslie of Broken Arrow, Oklahoma Daughter, Vonda Rempe and Daniel of Piedmont, Oklahoma Daughter, Aleta Capel of Broken Arrow, Oklahoma Son, Marc Cotner and Rita of Broken Arrow, Oklahoma Daughter, Julie Thrash and Jim of Edmond, Oklahoma Grandchildren; Lauren Rost, Morgan Guernsey and Thomas, Johanna Garza, Caleb Garrett, Garrett Rempe and Emily, Nathan Rempe, Breanna Sneed and Alex, Raymond Knapp, Sky Knapp, A.J. Thrash, J.P. Thrash, Joshua Cotner, David Cotner. Great-Grandchildren;Trinity Rost, Lacey Rost, Owen Guernsey, Kaiya Thomas, Liana Sneed He was preceded in death by his parents, brother, Ron Garrett, sister, Norma Boley.

Send flowers to the Garrett family.