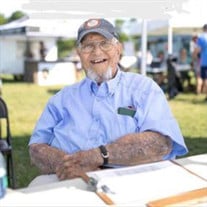 Jack passed on Tuesday, September 29, 2020 at Saint Francis Hospital, Tulsa. He was surrounded by his family. Jack was preceded in death by his wife, Jolene. He is survived by his daughters, Sherry Hill (Roger), Debra Sallis (Chuck), Donna Ohler (Chris) and the only boy, Michael McNeal (Stefanie.) He has three grandkids, Katie Sallis, Mac Sallis and Suzanne Wyatt (Taylor.) He also has a great-grandaughter, Jade Ann Futrel, who lovingly referred to him as “Big Dog.” Jack was born on March 19, 1935 in Drumright, Oklahoma to Eugene Byron McNeal and Katherine Josephine (Wheeler) McNeal. He was the baby of the family with two older sisters and a half brother. The McNeals lived in Drumright for a while before moving to East 13th Street in Tulsa. Jack attended Tulsa Central High School until his junior year. The summer prior to his senior year found him in Russell, Kansas hauling hay. He absolutely loved the Russell/Dorrance/Wilson area of Kansas. For his senior year, with the permission of his mom and dad, he lived with a local family to graduate from Dorrance High School It was there that he met Jolene Schneider, a young lady attending high school in the next town, Wilson. Jack graduated from Dorrance High School in 1953. Jolene graduated from Wilson High School in 1954 and they were married in Wilson on November 5, 1954. Jack and Jolene lived in Russell for several years while Jack worked for Quima Dairy. Jack was a Kansan at heart. He loved to visit the area and his last trip there was to attend his high school reunion last summer. In about 1959, they moved to Tulsa and lived with Jack’s mother on 13th Street for a short time before moving to the burgeoning suburb of north Tulsa. Jack and Jolene lived on North St. Louis until 1973, then moving to Owasso. Jack worked for Glencliffe Dairy in Tulsa, then as a shipping supervisor at Jorgensen Steel on Pine Street in Tulsa. He retired from Jorgensen in 1995. Jack had many hobbies and interests. He was a Boy Scout leader, even though he didn’t have any boys. He was a Tulsa Auxiliary police officer. And then there was his passion … Tulsa cycling. He would stay involved in cycling until the very end of his life. Michael was 7 when Jack bought him a BMX bicycle and that was the start of it all. Soon Jack and Jolene opened Wheels of Owasso, their bike shop, and worked there fixing bikes evenings and weekends while he continued to work at Jorgensen. Jack was a fixture on Freewheel, driving the Wheels of Owasso van, providing mechanic services for the riders. Jack held many officialship positions with USA Cycling, including being the state representative, approving every cyclist’s license category upgrades. He was always at the local and state races, fulfilling many duties, including that of chief referee. He was very involved with the Bicycle Racing Association of Oklahoma was serving as treasurer at his death. Jack loved cycling and the cycling community loved him. He made an impact on everyone, from beginners to senior riders. Everyone knew and respected Jack for his fairness and impartiality. Many say Jack was instrumental in making Oklahoma cycling what it is today, and for that his family is very, very proud. Services for Jack will be held on Monday, October 5th at Hayhurst Funeral Home, 1660 S. Elm Place, Broken Arrow at 11:00 a.m. Visitation will be at Hayhurst on Sunday, October 4th, from 2:00 to 4:00 p.m. In lieu of flowers, the family is requesting contributions be directed to Bicycle Racing Association of Oklahoma (BRAOK) in memory of Jack McNeal. Please make your check payable to the Tulsa Community Foundation, 7030 S. Yale, Suite 600, Tulsa, OK, 74136. Please include the memo “In Memory of Jack McNeal.” BRAOK promotes cycling to improve the quality of life for all within Oklahoma.

Jack passed on Tuesday, September 29, 2020 at Saint Francis Hospital, Tulsa. He was surrounded by his family. Jack was preceded in death by his wife, Jolene. He is survived by his daughters, Sherry Hill (Roger), Debra Sallis (Chuck), Donna... View Obituary & Service Information

Send flowers to the McNeal family.