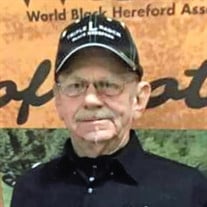 Jimmy Don Collins was born on July 7, 1940 in Broken Arrow, Oklahoma the son of James W. Collins and Lola Rebecca (Garoutte) Collins. He passed from this life on Monday, February 14, 2022 in Broken Arrow, Oklahoma. He graduated from Broken Arrow High School in 1958. While attending school he played for the Broken Arrow football team, basketball team and baseball team. He also served in the Oklahoma Army National Guard. He met and married the love of his life, Sherry and had four children, Robin, Kristie, Randy and Brett. Those four children were “the pride” of his life. J.D worked for Rockwell International – (Boeing Aircraft) for 37 ½ years in the Quality Assurance department. During those years he inspected many parts and components for today’s aircraft, space vehicles and even the International Space Station. J.D. was very patriotic and proud of his country, state and city. He had a strong belief in God and his savior Jesus Christ. He prays that all his family will accept Christ and enjoy the blessing that is in store for them by living for Him. J.D.’s hobbies included fishing, hunting, playing and watching football, baseball, softball and basketball. He also enjoyed team roping, the rodeo, finding old coins and jewelry with his metal detector. One of his favorite things to do was to sit around a campfire and reminisce with friends and family. He will be dearly missed by his children, family and friends. He is survived by: Daughters: Robin Lynn Collins of Wagoner, Oklahoma and Kristie Moore of Broken Arrow, Oklahoma Son: Brett Vincent Collins of Broken Arrow, Oklahoma Grandchildren: Justin Moore of Broken Arrow, Oklahoma and Christopher Moore of Broken Arrow, Oklahoma and Jase Collins of Broken Arrow, Oklahoma. Sister: Callie Lemon of Mexia, Texas and Evan Lemon of Mexia, Texas. He is preceded in death by: Late Wife, Frankie L. Taylor, Parents, James and Lola Collins, Brother, Jerry Lee Collins

Send flowers to the Collins family.