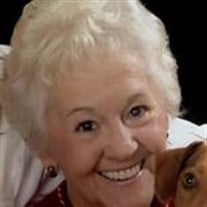 Iva Jones, 85, loving wife, mother, grandmother, and great-grandmother passed peacefully as a result of COVID-19. Iva was born on May 3, 1935 in Kellyville, Oklahoma. She died on February 3, 2021. She is preceded in death by her husband David Jones, who died recently on December 17, 2020. She is also preceded in death by her parents: William “Bill” Hurst and Nora (Romine) Hurst. She is also preceded in death by her siblings Orval, Billy, Kenny and Betty. Her surviving sibling is Doris and Duane (husband). She is also survived by her daughter, Carla June, from a previous marriage to Carl Miller. Carla’s husband, Michael, their son, Cory and daughter, Meagan, and her husband Nathan. She is also survived by Robbie, daughter, with her husband Jack and their sons Chance and Eli. In addition to her four grandchildren, she has seven great-grandchildren: Carter, Clara, Lily, Liam, Oliver, Everett, and Emilia. She is also survived by several in-laws, nieces and nephews. Iva grew up on a farm outside Kellyville. She states that growing up they worked hard for everything they had. She enjoyed living in the country. Throughout her life Iva held several interesting jobs. She started as a manual switchboard telephone operator in Sapulpa, Oklahoma. Subsequently she worked at Sears and Roebuck, Cutter aviation, Retherford publications, and as bookkeeper. One of her last jobs was owner/operator of the Tastee Treat drive-in restaurant in Broken Arrow, Oklahoma. Kenny, Dave and Iva ran the Tastee Treat for about 10 years prior to the current owner. It was said by her neighbors that “Iva was the best neighbor”. Iva frequently was seen outside her home working in the yard. She greeted all her neighbors with a friendly smile. She was quick-witted and very much enjoyed a little joking banter with her neighbors. One of her neighbors played a trick on her at one time and so to repay the favor she had a fruit bouquet made to deliver. The only problem… Most of the fruit was spoiled. Iva strongly believed in “doing things the right way”. She took great pride in keeping her home and yard immaculate. Iva says she got her love of cleaning “anything and everything” at a very early age. She also states that growing up on the farm is when she learned the value of hard work and the rewards of doing a great job. She loved to cook. She always had cookies and cakes ready for her grandkids. She states that her favorite drink “in the whole wide world” was coffee. She loved coffee so much that she says one time she actually ate some coffee grounds. So, there was always a pot of hot coffee waiting any guest. She dearly loved her family and was extremely proud of that fact. Her family loved her greatly in return. She will be dearly missed by her many friends and family. Iva very much loved her husband Dave. They were married about 30 years. You never saw Iva without Dave. They went everywhere together. A bright spot in Iva and Dave’s life was their dog, Lucy. One of their favorite past times was to sit on the front porch and greet neighbors or walk the dog. The viewing will be held at the Hayhurst funeral home on Sunday, February 7, 2021 from 4 PM to 8 PM. Other services will be delayed until the pandemic wanes. In lieu of flowers, the family wishes that you make a donation to the American Stroke Foundation or to a favorite charity of your choice in Iva’s name.

Iva Jones, 85, loving wife, mother, grandmother, and great-grandmother passed peacefully as a result of COVID-19. Iva was born on May 3, 1935 in Kellyville, Oklahoma. She died on February 3, 2021. She is preceded in death by her husband David... View Obituary & Service Information