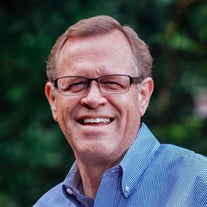 Irvin Wayne Pense, of Broken Arrow, passed away Wednesday, April 7, 2021 at the age of 73. Friends may visit Wayne at the funeral home Monday, April 12 from 10 to 8. Wayne was born Thursday, December 25, 1947 in Broken Arrow to Irvin “Slim” and Dorothy Mae (Taylor) Pense. On June 10, 1966 Wayne married the love of his life, Adana Jared in Coweta, and their union was blessed with two sons, Devin and Brian. After graduating from High School in Broken Arrow, Oklahoma in 1966, Wayne accepted a basketball scholarship from Oral Roberts University in Tulsa, Oklahoma, where he majored in Education. He later transferred to Northeastern State University in Tahlequah, Oklahoma, with a Business Administration major. His desire to teach and coach was changed some years later as he, his wife Adana, and their 4 year old son Devin, moved to Missouri to accept the pastorate of a small church. Their second son, Brian came along soon after they began the first of their 8 pastoral assignments which took them through 6 states, over a time span of 50 years in ministry. Wayne has served as a local church Youth Director, Pastor, District Overseer, Youth Camp Director, and Coordinator, and has served on numerous state and regional committees. Along with his pastoral assignments, Wayne served as the Regional Overseer of Hawaii and California for five years, and most recently as the Regional Bishop of the Heartland America Region, consisting of Arkansas, Kansas, Missouri, and Oklahoma. During his 50 plus years of ministry, Wayne had a passion for mentoring other pastors and leaders. Wayne loved to garden, fish and help anyone in need. His greatest joy in life was spending time with his family and grandchildren. Survivors include: Wife Adana Pense of the home Sons Devin Pense and wife Michelle of Dallas, TX Brian Pense and wife Dixie of Broken Arrow Grandchildren Jorden, Casey and wife Brandy, Aubree, Madison and husband Martin, Tyler, and Olivia. Great-Grandchildren Micah, Elliot, Matthew, and Vivian Father-In-Law Clive Jared Wayne is predeceased by: Parents Slim and Dorothy Pense Brother Larry Pense

Send flowers to the Pense family.