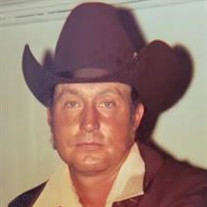 Howard Lee Wolfe was born in Theodosia, Missouri on Sunday, April 20, 1941, to Albert and Lucille (Hash) Wolfe. He passed away on Saturday, October 2, 2021, at his home in Catoosa, Oklahoma at the age of 80. Howard was the 3rd of seven children born to Albert and Lucille, having two brothers and four sisters. They grew up on a farm where they learned the value of hard work, including cutting and selling firewood to neighbors. Howard attended school through 9th grade, but the summer after that he was hired as a cowboy for the Robson Ranch. In the fall of 1963, Howard attended a pie supper at Oak Grove School where he met a young lady who caught his eye. After a few months of dating, he and Jeannie Gann were married on March 14, 1964, in Coweta, Oklahoma. A year later, they became parents to their beloved son, Randy. Howard enjoyed hunting, fishing, trapping, and was a cowboy from his hat down to his boots. Two of his standout horses through the years were “Razor” and “Punkin”. After retirement, Howard enjoyed spending time watching old western reruns on TV, loving his grandkids and great-grandkids, and raising some of the best corn, okra, and blackberries found anywhere. The family describes Howard as loving, caring, funny, determined and an animal-lover. He will be missed by all who knew and loved him. Left to cherish his memory are his loving wife, Alcie “Jeannie” Wolfe; Catoosa Son, Randall “Randy” Wolfe and his wife Mary; Broken Arrow Grandchildren, Colten Wolfe and his wife Anna Marie, Shanna Wolfe-McAdams, and Nikayla “Niki” Wolfe Great Grandchildren, Jaelyn McAdams, Cheyenne Wolfe, and Boone Wolfe Brothers, Jesse Wolfe and his wife Janie and Hervil “Bud” Wolfe and his wife Karen Sisters Bonnie Hagewood and her husband Jim, Betty Wolfe, and Debbie Wolfe-Falcon Those preceding him in death were his parents and sister Joyce Sisney

Howard Lee Wolfe was born in Theodosia, Missouri on Sunday, April 20, 1941, to Albert and Lucille (Hash) Wolfe. He passed away on Saturday, October 2, 2021, at his home in Catoosa, Oklahoma at the age of 80. Howard was the 3rd of seven children... View Obituary & Service Information

Send flowers to the Wolfe family.