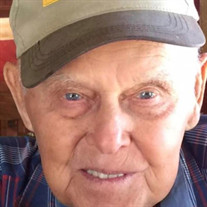 Herb Morris was born in Clear Fork, Adair County, Oklahoma on Tuesday, October 30, 1928, the third of eight children to Clyde Owen and Beulah (McCoy) Morris. He passed from this life on Monday, November 16, 2020 at the age of 92 in Tulsa. Herb and his siblings grew up farming alongside their parents raising both cattle and popcorn. Their place was the popcorn capital of Adair County. They would take it to Tahlequah to sell to folks all over the county. He attended school through the 8th grade, but the farm required he and his brothers’ full-time attention. As a young man he left home and headed west with a friend working farm jobs in several different states. They would hitchhike everywhere they went. On one ride in particular they noticed when they stopped to fill up with gas after a few hours that their driver had a Ruger pistol between his knees. They decided that was a good place for them to spend the night. His friend couldn’t read or write so Herb translated letters to his girlfriend back home. Herb always said that he could have said anything he wanted to her, and probably did. He and Wilma met on a bridge in California, even though they grew up only a few miles from one another. They went back home and married on December 4, 1954 in Tahlequah, Oklahoma. They raised two sons and one daughter. Herb worked hard all his life and worked until he was 80 years old. His children describe him as ornery, frugal, a hard worker, prankster, loving, and with selective hearing. He loved to hunt, garden (especially peppers), to sit on the back porch and watch the world go by. He enjoyed reading his newspaper each day, and you could find him reading an encyclopedia as well. He and Wilma were happily married for 62 years until her passing in 2016. Herb is survived by: Son, Les Morris and his wife, Joann of Broken Arrow Son, David “Keith” of Broken Arrow Daughter, Kim Genzel and husband Steve of Broken Arrow Grandson, Cody Morris of Broken Arrow Sister, Patt Brown of Independence, Missouri He was preceded in death by his wife, Wilma, his parents: Clyde and Beulah; four sisters: Mattie Francis, Margaret Mae, Cherry Lea and Pauline; and two brothers: Haskell and Clark

Herb Morris was born in Clear Fork, Adair County, Oklahoma on Tuesday, October 30, 1928, the third of eight children to Clyde Owen and Beulah (McCoy) Morris. He passed from this life on Monday, November 16, 2020 at the age of 92 in Tulsa. Herb... View Obituary & Service Information

The family of Herbert Morris created this Life Tributes page to make it easy to share your memories.

Send flowers to the Morris family.