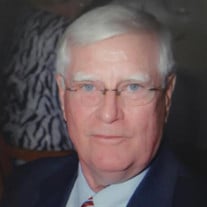 H. William “Bill” Curley, 86, of Broken Arrow, born September 25, 1934 to Paul Leonard and Bess V. (Welsh) Curley in Springfield, Missouri, passed away September 15, 2021. Bill Curley, known for his quick wit, love of life and laughter with family and friends, will be honored by close friends and family at a memorial service celebrating his life, Saturday, September 25, 2021 at 11:00, Hayhurst Funeral Home Chapel, Broken Arrow, OK. Bill’s full life began in Missouri with his loving parents, brother Bob and sister Ellen, and marrying his middle school sweetheart, Jane Hand, on June 18, 1954. He excelled in academics and athletics; selected to one of the first Missouri All-State football teams playing offense and defense, setting a state record in pole vault, and later being honored as a Nevada High School Wall of Fame member for his football, basketball, and track and field accomplishments. He was a proud Mizzou and Sigma Nu alum, playing football and earning his Bachelor of Arts degree in Mathematics at the University of Missouri, and enjoyed many lifelong friendships from Nevada and Columbia, MO. Bill had a successful 34 year career with Cities Service Oil Company, working his way from the oil patch in Odessa, TX to data processing in Bartlesville, OK to EDP Auditing, Systems Analyst department manager in Tulsa, OK. He was a longtime member of Indian Springs Country Club where he had many friends and played golf, and tennis with the Rafters well into his 70’s. He was adept at woodworking and art, loved music; playing guitar, singing and dancing, an avid reader and storyteller, and enjoyed traveling to visit friends, family, and abroad as much as taking in the sunset on his back patio with a glass of wine and his dog beside him. Bill was most proud, loved and supported his wife Jane of 47 years and their three children, Steve, Mike, and Chery. As a devoted father, coaching or always their biggest fan in sports to ballet, Boy Scouts to graduations, college to weddings, back yard cookouts to birthdays and celebrating holidays with seven grandchildren and nine great-grandchildren, he was the very best and dearly loved. Bill is survived by his sons, Steve Curley and wife Judy, Mike Curley, and daughter Chery Curley, his sister Ellen Curley Schmidt and sister-in-law Mary Curley, seven grandchildren: Erin Mitchell and husband Matt, Meghan Gallegos and husband Flip, Emily Geister and husband Brandon, Drew Curley, Patrick Curley, Ashley Cunningham and husband Michael, Melaney Wieser and husband Jim, and nine great-grandchildren: Ava and Vivi Mitchell, Benaiah, Elora, and Steven Geister, Marlee Gallegos, Aiden and Mason Cunningham, and Farrah Wieser. He is predeceased by his parents and wife Jane Curley and infant daughter Sharon Lee Curley, his brother Bob Curley and brother-in-law Phil Schmidt, and special friend Ruth Ann Kana. Memorials may be made in lieu of flowers to the Salvation Army Tulsa at http://www.salarmytulsa.org/financial-support/ .

Send flowers to the Curley family.