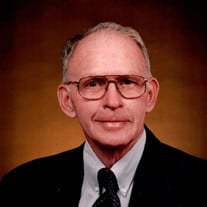 Harold Lloyd Moore was born on Saturday, August 12, 1933 in Pryor, Oklahoma to Homer Alonso and Jessie Mae (McCleery) Moore. He passed from this life to his eternal home in heaven on Wednesday, February 3, 2021 in Tulsa, Oklahoma at the age of 87. Harold was the youngest child and only son with three older sisters. They grew up children of a farming family, so he learned his strong work ethic early in life. They had cattle, chickens, and a small peach orchard on their property. He played baseball as a youngster and graduated from Pryor High School in 1951. Two years later, he joined the U.S. Army and was involved in the Korean Conflict until his honorable discharge in 1955. When he returned from his time in the service, he began his career as an Equipment Operator with Unit Rig in Tulsa. After many years working there, he completed his work life as a Security Officer with the American Red Cross in Tulsa; and also spent several years operating a successful lawn and landscaping business. In 1976 Harold and Barbara (Gilmore) Cooper were married in Tulsa. They made their home in Broken Arrow and enjoyed creating a lovely environment for friends and family to enjoy backyard barbecues, holiday gatherings, and playing games with many grandchildren. Harold enjoyed gardening, could fix any problem with a tractor or mower, and loved watching westerns on TV as well as the Lawrence Welk show. He and Barbara were longtime members of Northside Christian Church in Broken Arrow. Harold volunteered by keeping their lawn looking sharp for many years as a service to his church family. His family describe him as: kind, gentle, hardworking, sweet, thoughtful, and considerate. He will be missed by all who knew and loved him. Harold is survived by: His wife, Barbara of Tulsa Daughter, Karen Hutson (Bruce) of Deerfield Beach, Florida Stepsons: David Cooper (Lorrie) of Sierra Vista, Arizona Kenneth Cooper (Barbara) of Skiatook Michael Cooper (Jill) of Broken Arrow Jeffrey Cooper of Skiatook 9 Grandchildren: Brent, Bryan, Keith, Ryan, Kelly, Mike, Angie, Jeff and Scott and 11 Great Grandchildren. He was preceded in death by his parents: Homer and Jessie Moore; three sisters: Opal, Louise and Lula Mae (“Boy”); a step daughter-in-law: Susie Cooper; and one grandson: Dustin Cooper

Harold Lloyd Moore was born on Saturday, August 12, 1933 in Pryor, Oklahoma to Homer Alonso and Jessie Mae (McCleery) Moore. He passed from this life to his eternal home in heaven on Wednesday, February 3, 2021 in Tulsa, Oklahoma at the age... View Obituary & Service Information

Send flowers to the Moore family.