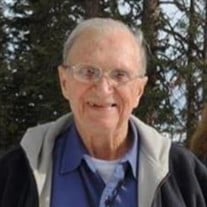 Hal Milford Sharpe, Jr. was born February 16, 1937 in Elk City, Oklahoma the son of Hal Milford, Sr. and Eloise (Self) Sharpe. He passed this life at St. Simeon’s in Tulsa, Oklahoma on Saturday, July 11, 2020. He was 83 years of age. Hal was a 1955 graduate of the New Mexico Military Institute and served in the U.S. Army for 22 years. He did tours of duty in both Korea and Viet Nam and was stationed stateside at Fort Sill and Fort Leavenworth. He retired at the rank of Major. He received a bachelor’s degree in Computer Science from Cameron University in Lawton, Oklahoma. Hal was married to the former Miss Hazel Kennicutt on June 24, 1961 in Turley, Oklahoma. Hal was a Lay Reader for the Episcopal Church in Lawton, Oklahoma and Olathe, Kansas. He enjoyed making silver and turquoise jewelry, playing hockey and spending time with everyone at Magnum Construction in the shop where he made jewelry. His greatest joy was his family, especially his grandkids, coaching them in hockey and volunteering to help the Catoosa Band with fundraisers. He was proud of his two grandsons who marched with The Pride of Broken Arrow. He was a 32nd degree Mason and a member of the Akdar Shrines. He was a lifetime member of the Military Order of Purple Heart. To his family and friends, he was “Happy Hal.” The family requests memorials to Alzheimer’s Research, 2448 East 81st Street, Suite 3000, Tulsa, Oklahoma 74137. He is survived by- His wife, Hazel Sharpe, of the home Daughters, Athene Sharpe of Broken Arrow; Juli Eloise (Sharpe) Redwine, and former Son-in-law Clint Redwine of Broken Arrow, OK Grandchildren, Steven and Karlina, Ryan and Jessi, Jordan, Justin and Nick Numerous Nieces and Nephews Hal was preceded in death by his parents, Hal Milford, Sr., and Eloise; a Brother, Larry.

Send flowers to the Sharpe family.