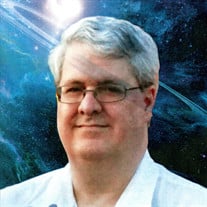 “Change is the essential process of all existence.”  — Mr. Spock, “Let That Be Your Last Battlefield,” Star Trek Born April 30, 1971, Gregory Neal Beauchamp – Greg – has embraced the ultimate change. Although he would have preferred to transition via the bridge of the starship Enterprise, Greg left this planet from his Sand Springs home on Thursday, November 19 at the age of 49. Every Tuesday, Greg joined his parents and brother for dinner, where conversation varied from movies and books to what happened at the office and occasionally fiery political debates. As Tuesdays are traditionally family days for Greg, a Memorial Service will be held at 2:00 P.M. on Tuesday, December 1, 2020 under the direction of Hayhurst Funeral Home in the Broken Arrow. Greg had a brilliant mind. He graduated from Union High School in 1989 and was selected an academic all stater, i.e. “Top 100 High School Graduates in Oklahoma.” He then became a TCU Horned Frog. At TCU he double majored in Physics and Mathematics. Deemed the department’s outstanding physics major upon graduation, he walked the stage Cum Laude. Greg’s Christian gift in life was ‘helps’ and all who knew him saw that he was a kind, caring soul with a giving heart; Greg was always willing to help others. This first occurred after grad school, when he moved to Stillwater to care for his 86 year old grandad. During his daylight hours, he worked in IT for Creative Labs. When the company moved all offices to Singapore, and after his granddad died at age 90, Greg moved to Sand Springs. Since his return to the Tulsa area, he has developed an iPad app known as WillCrafter, and worked as a legal assistant for his dad. Greg loved science fiction, which began long, long ago, in a galaxy far, far away – he first was drawn to the original Star Wars movie in 1977. Then came the Star Trek movie, and the genre expanded from there. This naturally led to role playing games such as Dungeons and Dragon, Discworld and Deadlands. Gregs closest friends would gather regularly with potluck dinners and explore the magic and adventure of the worlds they created with these games. An avid reader, Greg had a vast library of books ranging from Dickens, Hemingway and Agatha Christie, to Issac Asimov and Terry Pratchett. He also collected comic books, movies and anime. He had a quirky, dry sense of humor, and loved to quote classic comedians such as Groucho Marx and Charlie Chaplin. Greg is survived by his parents, Jim and Fran Beauchamp of Broken Arrow, Oklahoma; Sister, Colleen Stiles and husband Chris of Tulsa, Oklahoma; and Brother, John Beauchamp and Wife Suzy of Tulsa, Oklahoma; plus extended family and friends who will miss him dearly. In remembrance of Greg and in lieu of flowers, the family asks you to consider making a donation to Vernon A.M.E. Church, 311 Greenwood Ave, Tulsa, Ok 74102; this church has provided over 215,000 meals to needy families during the pandemic.

“Change is the essential process of all existence.”  — Mr. Spock,...

Send flowers to the Beauchamp family.