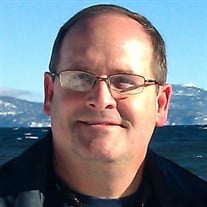 Glenn Thomas Davis died unexpectedly on Sunday, December 12, 2021, at the age of 59. He was born in Diptipur, India on Saturday, February 3, 1962, to Lew A. and Dorothy E. (Armstrong) Davis, who were living in India as missionaries. He and his three older siblings spent much of their early life living in India and traveling. After spending his ninth birthday on the African savannah, Glenn and his family moved to Blackwell, Oklahoma, where he attended school, except for one year at Woodstock International School in Mussoorie, India. He graduated from Blackwell High School in 1980. He often spent summers in high school traveling and working at the YMCA in Rocky Mountain National Park. One summer, he rode his unicycle up and down Trail Ridge Road just because it sounded like fun. While attending Phillips University in Enid, Oklahoma, he met and fell in love with Mary Fate while watching M.A.S.H. with friends. They were married on August 6, 1983, in Tulsa, Oklahoma. They moved to Tulsa after graduating with bachelor's degrees from Phillips University and have lived there ever since. Glenn and Mary had one daughter and one son. With Tulsa as a base, Glenn, Mary, and their family continued to travel and explore. Glenn was called to ministry and earned his Master of Divinity from Phillips Theological Seminary in Tulsa in 2000. He pastored a church in Sand Springs before coming to Broken Arrow’s First Christian Church in 2004. Glenn was a servant at heart. Besides shepherding his people at church, he was a chaplain for both the Broken Arrow Police Department as well as the Broken Arrow Fire Department since 2005. Besides ministry, Glenn’s passions lay in traveling and photography. Glenn would take his time on a hike, capturing the beauty and complexity of the natural world. He would stay up late or get up before the sunrise to capture just the right image. He took photographs across the world through his travels with Mary and his family: hiking in the Grand Canyon and mountains of Colorado, exploring the Holy Land in the Middle East, returning to India, SCUBA diving in the Caribbean, and relaxing in Florida to name a few. Glenn brought reassurance, acceptance, and laughter everywhere he went. While his groan-worthy humor was often two-thirds of a pun, he always made everyone laugh and smile. Glenn’s grandchildren called their “Bapaw” the silliest person in the world. He was a child at heart, and his grandchildren brought out the best in him. He will truly be missed by all who knew and loved him. Left to cherish his memory are wife, Mary Daughter, Laura Bryant and her husband, Logan of Tulsa Son, Jonathan Davis and his wife, Sara of Edmond Mother, Dorothy Davis of Tulsa Mother-in-Law, Ruth Ann Fate of Tulsa Grandchildren: Ian Bryant, Lily Davis, Arthur Davis, and Samuel Bryant Brother, John Davis and his wife Karen of Estes Park, Colorado Brother, Bruce Davis and his wife Sue of Chicago, Illinois Sister, Carolyn Ruck and her husband Scott of Truckee, California And numerous nieces, nephews, and cousins. Those who preceded Glenn in death are his father, Lew Davis and father-in-law, Martin Fate, Jr. In lieu of flowers, the family asks that donations be made to First Christian Church, Broken Arrow. A Celebration of Life for Pastor Glenn Davis will be held at the First Christian Church in Broken Arrow on Saturday, January 15, 2022, at 10:30 AM. Masks will be required inside the church and throughout the celebration.

Glenn Thomas Davis died unexpectedly on Sunday, December 12, 2021, at the age of 59. He was born in Diptipur, India on Saturday, February 3, 1962, to Lew A. and Dorothy E. (Armstrong) Davis, who were living in India as missionaries. He and his... View Obituary & Service Information

In lieu of flowers, Glenn's family is requesting donations be made to First Christian Church, Broken Arrow

Send flowers to the Davis family.