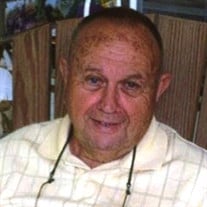 Glen Mason Jones, age 80, passed away October 30, 2020 at his home in Broken Arrow, Oklahoma. Glen was born in Edmond, Oklahoma on April 2, 1940 to John Lawrence and Lucille (Bishop) Jones. He loved to tell stories of his antics as a boy growing up on a mini farm in eastern Oklahoma City. He was a farm boy at heart as he raised calves and pigs that he showed at the fair. His Papa and Granny Bishop were very special people in his life. After his Papa passed away his Granny came to live with them and was a very Godly influence. Being a preacher was always her goal for him. Glen graduated from Pernell High School in 1958 and went to work for Roy R. Love at Factory Distributing in Oklahoma City. In 1959, Glen married his high school sweetheart Patricia (Pat) Carol Jones and they had three children: Amber, Melinda and Jeff. Glen was with Gibson Products for thirteen years as their sporting goods buyer for nineteen stores. In 1971, he decided to venture out on his own. He bought a well-known bait and tackle store in Muskogee, Oklahoma and it became Glen’s Sport Center, which was the hub for hunters and fishermen in the area. In 1986, Glen began a long tenure in education at Connors State College. This was a ministry for Glen as his office was always open to those who needed a listening ear or wise counsel. As bookstore manager and later as Auxiliary Enterprises Administrator, he was also able to use his full knowledge as a businessman to benefit the college’s finances. Glen retired from Connors State College after sixteen years. He enjoyed retirement, and in 2006 purchased a mini farm in Keys, Oklahoma where he got to relive his childhood. In August of 2007, he began a ministry in preaching (his Granny’s goal) at Grandview Baptist Church in Tahlequah, Oklahoma, where he was dearly loved by his congregation. In 2016, due to health reasons it became necessary to live closer to his middle daughter in Broken Arrow where Glen and Pat found a wonderful church home at Journey Bible Church. Glen’s favorite activities were spending time with his wife and family. His grandchildren were his best playmates. He loved just listening to them and letting them know how special they were to him. Glen was an encourager who loved people. He talked to everyone, never meeting a stranger. He made people feel valued and loved. He always looked for opportunities to tell others about the Lord. Glen was the rock of his family. His’ love for his wife, children, and grandchildren was only surpassed by his love for the Lord and was evident by the way he lived his life. “For by grace are you saved through faith; and that not of yourselves, it is a gift of God – not of works, lest any man should boast.” Ephesians 2.8-9 In lieu of flowers, please consider a donation to Alzheimers' Research at www.alz.org/donate Glen is survived by: His wife, Pat, of the home Daughters, Amber Horn (Rick) of Keys Melinda Smiley (Bill) of Broken Arrow 7 Grandchildren: Michelle Laymon (Dean), Nicole Kelly (Jason), Kalin Stallworth (Kyle), Brittany McNamara (Joey), Logan Horn (Ashley), Meredith Bryan (Jaryd) and Ethan Dixon. 15 Great Grandchildren: Mariah Osburn (Kyle), Brian Osburn, Courtney Osburn, Mason Laymon, Deano Laymon, Alexis Pavey, Easton Kelly, Jaxon Weaver, Preston Stallworth, Levi Stallworth, Abbi Jo Ramsey, Stormi Horn, Stryker Horn, Straxton Horn and Rylie Bryan. 2 Great Great Grandchildren: Letty Osburn and Brilynn Moss And a host of nieces and nephews. He was preceded in death by parents, John and Lizzy (Bishop) Jones; one brother: Lawrence Jones; two sisters: Betty Lou Moore and Katie Hemmerling and a son: Jeffrey Jones.

Glen Mason Jones, age 80, passed away October 30, 2020 at his home in Broken Arrow, Oklahoma. Glen was born in Edmond, Oklahoma on April 2, 1940 to John Lawrence and Lucille (Bishop) Jones. He loved to tell stories of his antics as a boy growing... View Obituary & Service Information