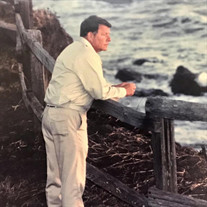 Gary Alan Parsons was born in Baxter Springs, Kansas on Wednesday, April 13, 1932, to Charles F. and Ida Mae (VanDusen) Parsons. He passed from this life to his eternal home in heaven on Sunday, December 19, 2021, at the age of 89 surrounded by his family. Gary grew up in Baxter Springs, attending school there and graduated from Baxter Springs High School in 1950. He met and fell in love with Helen Eileen Johnson, and they married on March 1, 1952. They were happily married for 67 years until Helen’s passing in 2019. Gary began a 40-year career with American Airlines in 1952 and retired from there as Director of Production Control. He and Helen were the parents of one son and one daughter. He was a private pilot that enjoyed his quiet time flying his Grumman Tiger airplane. Additionally, he was an avid hunter and fisherman, and enjoyed coaching and watching sports. He also played basketball and was a member of the American Airlines “Gray Ghosts” softball team. Gary and Helen were charter members of St. Stephens United Methodist Church in Broken Arrow. In his spare time, Gary enjoyed playing golf, woodcarving, camping, raising cattle, and lake life. He will be missed by all who knew and loved him. Left to cherish his memory are son Richard Parsons and his wife, Maria, of Broken Arrow Daughter DeAnn Duggins and her husband, Pat, of Broken Arrow 4 Grandchildren: Eric W. Pearson and his wife, Leigh Hayden Combe, and her husband, Justin Patrick Duggins, and his wife, Amber Paula Amsden Keith Amsden Numerous great grandchildren, other family members and friends Those who preceded him in death were his parents, Charles F. and Ida Mae Parsons Henderson, his wife, Helen Eileen, stepfather, Frank. S. Henderson, and two stepbrothers (John and Jim). In lieu of flowers, the family asks that memorials be made to St. Stephens Methodist Church Care Ministries, and/or a charity of your personal choosing.

Gary Alan Parsons was born in Baxter Springs, Kansas on Wednesday, April 13, 1932, to Charles F. and Ida Mae (VanDusen) Parsons. He passed from this life to his eternal home in heaven on Sunday, December 19, 2021, at the age of 89 surrounded... View Obituary & Service Information

The family of Gary Parsons created this Life Tributes page to make it easy to share your memories.

Send flowers to the Parsons family.