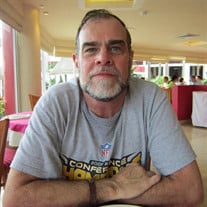 Gary Cheeseman was born October 30, 1950 in McKeesport, Pennsylvania to Charles Cecil and Violet (Morton) Cheeseman. He passed from this world on Thursday, July 8, 2021 in Muskogee, Oklahoma at the age of 70. Services are under the direction of Hayhurst Funeral Home. Gary was a 1968 high school graduate of Elizabeth Forward High School in Elizabeth, PA. He furthered his education with an Associate’s Degree in Specialized Technology on Aircraft from the Pittsburgh Institute of Aeronautics. In 1970, Gary enlisted in the United States Navy. He was stationed for active duty at the Naval Air Station in Dallas, Texas until 1976. He then joined the United States Naval Reserves where he served at the Naval Air Station in Point Mugu, California until 1980. During his time in the Navy, he was a Line Supervisor and Ground Support Electrician. After his separation from the Navy, Gary relocated to Tulsa, Oklahoma, and worked for State Farm Insurance as a Maintenance Specialist-Limited First-Class Stationary Engineer. He retired from State Farm in 2003. Gary was a man of many talents. He was an artist, loved listening to classic rock and jazz, and enjoyed making his own wine and beer. Gary was skilled in building things, was a master craftsman in woodworking, and enjoyed working on cars. He was a lifelong Pittsburgh Steelers fan, enjoyed the outdoors, and going to the lake for camping and boating. Through marriage, Gary had one son, two daughters, and two step-daughters. In lieu of flower the family would like you to consider donating to: Salvation Army 1-800-SAL-ARMY https://give.salvationarmyusa.org/online-donation/donate-money He is survived by, Son, Gary Cheeseman and Sally of Rosenberg, Texas Daughters, Jennifer Cheeseman-Rudzke of West Newton, Pennsylvania Tina Kasardo of Elizabeth, Pennsylvania Jennifer Pruitt of Broken Arrow, Oklahoma Karen Myers of Broken Arrow, Oklahoma Grandchildren, Garrett Rudzke, Jeffrey Rudzke, Gabriel Kasardo, Arianna Pruitt, Colton Pruitt, Jocelyn Pruitt, Kaela Pruitt, Kaylie Myers, Jackson Myers, Dylan Myers Sister, Cheryl Blackwell of Richmond, Virginia Nieces, Beth Hubbard and Kristen Vasquez of Richmond, Virginia Significant Other, Sandra Wyman of Tulsa, Oklahoma Preceded in death by parents, and sister, Saundra Cheeseman.

Gary Cheeseman was born October 30, 1950 in McKeesport, Pennsylvania to Charles Cecil and Violet (Morton) Cheeseman. He passed from this world on Thursday, July 8, 2021 in Muskogee, Oklahoma at the age of 70. Services are under the direction... View Obituary & Service Information

The family of Gary Cheeseman created this Life Tributes page to make it easy to share your memories.

Send flowers to the Cheeseman family.