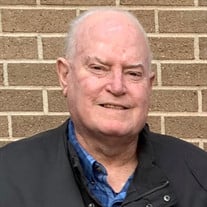 Gary Banister Buckner was a loving husband, father, grandfather, great-grandfather, and friend. He passed from this life to his eternal home in Heaven on Friday, December 31, 2021, in Tulsa, Oklahoma at the age of 78 years young. He was born in Champagne, Illinois on October 25, 1943, to Thomas Banister and Pauline Ellen (Duncan) Buckner. Gary grew up in Fort Worth, TX and graduated from L.D. Bell High School in Bedford in 1962. After high school, Gary attended Bethany Nazarene College for a year and then enlisted in the U.S. Army Reserves. He met the love of his life, Linda, at the age of 16 and they married on June 12, 1965, in Arpelar, Oklahoma. They were blessed with two daughters, Shelly, and Carrie. Gary was a gifted singer, and he used his talent singing in numerous choirs and churches, as well as singing tenor with the Good News Quartet. He carried his love of southern gospel music throughout his life. Gary retired from a long career in Information Technology. He began his career at St. Regis Paper Company as a computer programmer and retired from Witherspoon Electric, with several companies in between. His business sense and work ethic are characteristics that have greatly impacted his children and grandchildren. He faithfully served the Lord in numerous positions at the Nazarene churches he attended: choir member, music director, board member, church treasurer, and most recently, director of the Regency Park Church of the Nazarene Men’s Retreat. Gary’s biggest joy in life the last few years has been spending time with his family and supporting his grandchildren in everything they do. Gary is survived by his wife of 56 years, Linda, of the home in Tulsa, OK; daughter, Shelly Buckner (Travis Crowden) of Fort Worth, Texas; daughter, Carrie Smith (Darren) of Broken Arrow, OK; sister, Debbie Witherspoon (David) of Cleburne, Texas; four grandchildren: Kassadi Underwood (Grant), Cameron Smith, Jayden Smith, and Savannah Gleckler; two great-grandchildren: Khloee Mae Underwood and Kaden Garrett Underwood; and numerous nieces, nephews, and cousins. He was preceded in death by his parents and his mother-in-law, Lula Mae Sullenger. Visitation will be held at Hayhurst Funeral Home in Broken Arrow, OK on Wednesday, January 5 from 6:00 – 8:00 p.m. The Celebration of his Life will be held on Thursday, January 6 at 10:00 a.m. at Regency Park Church of the Nazarene in Tulsa, OK.

Gary Banister Buckner was a loving husband, father, grandfather, great-grandfather, and friend. He passed from this life to his eternal home in Heaven on Friday, December 31, 2021, in Tulsa, Oklahoma at the age of 78 years young. He was born... View Obituary & Service Information

The family of Gary Buckner created this Life Tributes page to make it easy to share your memories.

Send flowers to the Buckner family.