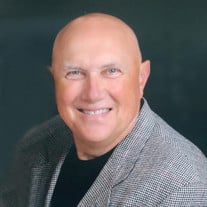 Floyd Davis, Jr. Private Funeral services for Floyd F. Davis, Jr. have been scheduled for Tuesday, April 21, 2020 at the Hayhurst Funeral Home Chapel. The general public can watch the service live at 11:00 AM at https://vimeo.com/409035210 or on the Hayhurst Funeral Home Facebook Page. Floyd Francis Davis, Jr. was born on Sunday, May 30, 1943 in Miami, Oklahoma, the son of Floyd Francis and Dorothy (Myers) Davis, Sr. He passed this life at the Legends at Mingo Road in Tulsa, Oklahoma. He was 76 years of age. Junior, as he was known to everyone, was a 1961 graduate of Miami, Oklahoma high school. He attended Northeastern Oklahoma college in Miami and Oklahoma State University in Stillwater. He married the former Miss Phyllis Rhine on November 20, 1964 in Wyandotte, Oklahoma. They made their home in Tulsa where Floyd was a financial advisor with Edward Jones. Floyd was a veteran, having served in the United States Army. His hobbies included golf, hunting, fishing and singing. One of his favorites was the fishing trips to Canada. Floyd sang in several trios, was on the Woodlake Assembly church board and a Light for the Lost Councilman. His greatest joy was being with his family, especially his grandchildren. Floyd was a member of The Assembly in Broken Arrow and the family requests memorials to The Assembly, building fund, 3500 West New Orleans, Broken Arrow, OK 74012. He is survived by, Wife, Phyllis Davis, Tulsa, OK Daughter, Angela and husband Kyle Rhodes, Broken Arrow, OK Son, Eric and wife Vallerie Davis, Tulsa, OK Grandchildren, Dustin, Chelsea and husband Austin, Tyson, Madison and Mason Great Grandson, Donny He was preceded in death by his parents.

Floyd Davis, Jr. Private Funeral services for Floyd F. Davis, Jr. have been scheduled for Tuesday, April 21, 2020 at the Hayhurst Funeral Home Chapel. The general public can watch the service live at 11:00 AM at https://vimeo.com/409035210... View Obituary & Service Information