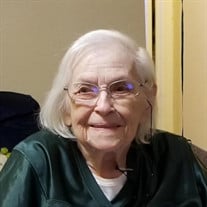 Florence M. “Pat” Gale Jergensen was born on St. Patrick’s Day, March 17, 1919 in a small rural town in Western Nebraska. She was the second child of what would eventually be 8 siblings. She was raised in a sod house out on the Prairie where the family endured whatever weather came their way. She and the two brothers closest in age to her attended the country school a couple of miles away. When the weather was bad, she and her two brothers rode the family horse to school. If the snowy weather got so treacherous that they could not see, they would turn the reins loose and let the horse proceed – straight to the family barn! Her father was a ranch foreman on property owned by one of his brothers and her mother cooked for the hired hands. When our Mom was old enough to help in the kitchen, she participated in the cooking and cleaning. The family eventually moved to the larger city of North Platte, Nebraska, where her father took a job working for the City Parks Department. She graduated from North Platte High School in 1937 and married our father, Glen Jergensen, her high school sweetheart, on March 5, 1939. Pat and Glen raised 6 children, all born in North Platte. Our father served in the Navy during WWII, stationed in Farragut, ID for most of his service, working as an electrician making repairs to the electrical systems on the ships. He also served a few months at Pearl Harbor as the war was drawing to a conclusion before being Honorably Discharged in 1945. Our father worked as an electrician for the City of North Platte for 30 years before suffering a debilitating stroke. Our mother raised the kids and ran the household during the time our father was employed. After his disability forced him into retirement, our mother went to work as a sales clerk at the local Sears, Roebuck store until she retired. Mom and dad saw all 6 of their children graduate from North Platte High School and then all 6 went away to the Church-affiliated college in Bethany, Oklahoma, (Bethany Nazarene College, now Southern Nazarene University) where each of us graduated - a huge sacrifice on their part to make certain their children received a strong quality formal education as well as a strong spiritual education. After our mother retired, it became obvious that she would be unable to continue to care for our father at home, so we turned to the Veteran’s Association for assistance in caring for him. Son Gary was made formal guardian of our father and moved them both to Oklahoma in 1983 as Gary lived in Norman. Eventually Gary placed our father in the Ardmore, OK, VA facility and Mom took an apartment nearby. Our father lived at the VA unit until his death in September, 1997. Mom maintained her independent living arrangements, living near Gary where he could assist her with any special needs she might have, until she had to undergo heart surgery at age 96. A fall and broken hip a couple years later has further limited her mobility, leading us to place her in an assisted living facility where she now resides. Mom has lived a wonderful life, progressing from horse and buggy transportation through the invention of automotive travel, trains, and airplanes. She has witnessed space travel on television, and has seen men walking on the moon. She has lived through blizzards, ice storms, tornadoes, heat, and drought, the Great Depression, WWII, the Korean Conflict, the Cold War, the Berlin wall, Viet Nam, and Gulf Wars. She has lived under Presidential Administrations from Woodrow Wilson to Donald Trump. She has witnessed the changing geography of our world and has seen enemies such as Germany, Russia, and Japan become our allies. All 6 of her children are still living and will be present with her to celebrate her 100th birthday. She has 14 grandchildren, 35 great grandchildren, and two great-great grandchildren. Although she has obviously outlived most of her friends and has only her youngest brother and sister still living, she will have a large contingent of family present to sing “Happy Birthday” to her, along with the residents and staff of Canoe Brook Assisted Living and friends from her church. Her faith has sustained her through many trials and challenges on earth, but her belief in God has never wavered. She has been the praying Mom who has been a model of excellence for her children throughout our lives.

The family of Florence M. Jergensen created this Life Tributes page to make it easy to share your memories.

Send flowers to the Jergensen family.